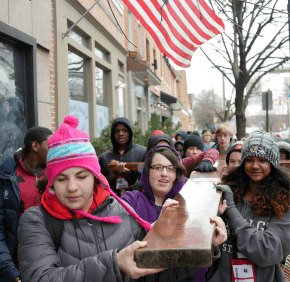 By Erik Zygmont
ezygmont@CatholicReview.org
Twitter @ReviewErik
The unseasonable cold and wind at the Archdiocese of Baltimore’s 21st annual Youth and Young Adult Pilgrimage left walkers with little choice but to enjoy it.
“I’m Lee Benson; I’m from St. Ignatius in Hickory; I’m in my second year at seminary, and I can’t feel my face!” yelled seminarian Lee Benson from the stage at the pre-pilgrimage rally at St. Mary’s Spiritual Center, located at 600 N. Paca St., the morning of March 28.
“We’re not the smartest seminarians,” quipped Zachary Crowley, a fellow future priest. “None of us brought hats or gloves.”
To view a slideshow of the day, navigate the arrows below.
Despite the cold, an estimated 600 teens from across the archdiocese, many of them youth ministry participants or confirmation candidates, joined seminarians, priests, Bishop Denis J. Madden and Archbishop William E. Lori, cheerfully walking more than three miles to the theme “Walk in Truth.”
Stops on the all-day pilgrimage included eucharistic adoration at the Basilica of the National Shrine of the Assumption of the Blessed Virgin Mary; a John Angotti concert at Cristo Rey Jesuit High School; Stations of the Cross at Holy Rosary in Fells Point; and a concluding Mass in celebration of Palm Sunday at St. Casimir in Canton.
While different parishes took turns carrying a large wooden cross, all pilgrims carried small, personal wooden crosses on which were written names of people for whom they prayed.
Many wore buttons in memory of Mark Pacione, who helped develop the archdiocesan division of youth and young adult ministry, which he led until 2009. Pacione died suddenly in December.
“In a very personal way, your presence here today brings me a lot of inspiration and a lot of encouragement,” Archbishop Lori said at the pre-pilgrimage rally.
He acknowledged that 600 teens walking through downtown Baltimore would be a spectacle.
“Somebody might just ask us what the heck we are doing,” he said. “We’re here on the streets of Baltimore to bear witness to Jesus.”
“Truth can be uncomfortable,” Archbishop Spalding High School senior Gabby Mrozek said to the crowd. “It takes walking your faith no matter what your friends or people think.”
Sporting a baseball cap with the words “I’m Catholic and I know it,” 17-year-old Armando Fernandez seemed to be able to handle the truth.
“I’m involved to grow in my faith and to help others as they go through the same thing that I am,” said Fernandez, an avid participant in the National Catholic Youth Conference and the Baltimore Youth Catholic Conference, held on alternate years.
“I’m attending the pilgrimage to see other great Catholic teens,” he added.
Fernandez, a parishioner of the Catholic Churches of Glen Burnie, sees his Catholic peers on a weekly basis, thanks to his parish’s active youth ministry. Dan Miller, in his first year as youth minister in Glen Burnie, where Church of the Crucifixion, Good Shepherd and Holy Trinity share a pastor and other resources, said nearly half his confirmation candidates walked in the pilgrimage, and a group of others were planning to feed the priests and seminarians before the archdiocese’s March 30 Chrism Mass.
“Between the pilgrimage and Chrism Mass, we have over three-quarters of our teens participating,” Miller said, adding that, thanks to effective evangelization from Glen Burnie’s youth ministers, he didn’t have to twist any arms.
Appealing to human curiosity didn’t hurt either.
“I told them,” Miller said, “they would get to see what the archbishop eats for lunch.”
“Even though it’s freezing cold, it’s fun to walk around with fellow Catholic youths,” said Tanairryn Sorto, 17, a Glen Burnie parishioner.
As a peer minister, Sorto helps confirmation candidates prepare for the sacrament that was a “life-changing experience” for herself.
“I got to see that through others I could become more connected to God and my faith,” she said.
Corrina Murphy, 14, a confirmation candidate at St. Francis of Assisi in Fulton, called the pilgrimage “a new experience.”
“I’m enjoying walking with a bunch of other people,” she said. “There’s more of a connection.”
Archbishop Lori touched on the same sentiment in his homily at eucharistic adoration at the basilica, the first stop on the pilgrimage. After getting lost while walking around Rome, he “did what any sensible person would do,” and bought himself a cappuccino.
He also received frank advice from a priest on how to survive Rome: “You had better not walk alone.”
“I’m going to give the same advice to you,” Archbishop Lori told the teens packing the basilica. “Walking with Jesus means walking with one another. That’s why he gave us the church.”
Also see:
Western Maryland youths begin Holy Week reaching out to the poor
Precious memories preserved in book about Baltimore’s Little Italy
Vigil recalls overdose victims in Westminster
PrevNext