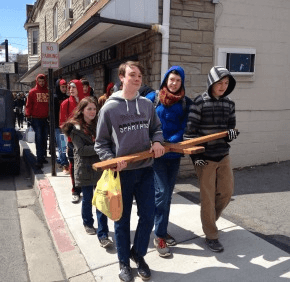 By George P. Matysek Jr.
gmatysek@CatholicReview.org
Twitter: @ReviewMatysek
CUMBERLAND – A man with gray, unkempt hair and a grizzled beard sat on a low stone wall in downtown Cumberland March 28 when a pair of smiling Catholic youths approached.
Extending a hand, a teenage girl offered the stranger a plastic bag she had stuffed with adhesive bandages, lip balm, granola bars, tissues, cleaning wipes and a cross.
As an icy wind rattled a no loitering sign hanging on a green dumpster behind him, the man accepted the gift.
“Thank you,” he said, smiling wryly. “Thank you.”
The fleeting encounter between a person in need and Catholic young people was one of many during the annual Catholic Regional Youth Pilgrimage. Approximately 70 teens from all the parishes of Western Maryland began their Holy Week at the event, walking through frigid city streets in a public display of their faith.
The pilgrimage launched at the Shrine of Ss. Peter and Paul and made stops at St. Patrick Church, the downtown Cumberland Mall, Union Rescue Mission, Friendship Haven Church and the First Way Pregnancy Center.

At the Shrine of Ss. Peter and Paul in Cumberland, youths prepare care packages for the poor that they distributed during during the March 28 Catholic Regional Youth Pilgrimage. (George P. Matysek Jr. | CR Staff)
The young people took turns carrying a 7-foot wooden cross along the way, praying a decade of the rosary at each stop. They  gave out care packages, while also giving gifts of diapers, baby supplies and other goods at the outreach centers.
“People get to see what we stand for,” said Abby Lapid, a 16-year-old parishioner of the Mountain Maryland Four parish who worships at St. Michael in Frostburg. “We stand for helping others and making sure people can be their best selves.”

Youths participate in the March 28 Catholic Regional Youth Pilgrimage in Cumberland.
(George P. Matysek Jr. | CR Staff)
Tessa Lutton,  a 15-year-old parishioner of the Mountain Maryland Four, who attends Mass at St. Peter in Westernport, said it was moving to be of assistance to others. She gave her care package to a man and a woman at the Union Rescue Mission.
“It really opens your heart and opens your mind to see what others go through,” she said.
Dan Taylor, who helps run the Union Rescue Mission, told the youths his mission operates three shelters. It feeds up to 400 people a day, in addition to giving away food and supplies from pantries that are supported by more than 200 churches and others in the community.
“The worst problem in our area is hunger,” he said. “We also have people who come from all over the city just to get some diapers for their children.”
Frostburg Mayor W. Robert Flanigan, who participated in the pilgrimage with his youngest son, told the Catholic Review Western Maryland has been hit hard by an economic recession that came later to the region than elsewhere in Maryland.
“As the eastern part of the state is starting to recover from it,” he said, “we’re still feeling the effect of it. It’s pretty bad here.”
Flanigan, who attends Mass at St. Michael in Frostburg, said he was impressed with the young people who participated in the pilgrimage.
“Anytime you get anyone out in public representing what they think is important to them is very special,” he said.

Youths pray the rosary outside St. Patrick Church in Cumberland during the March 28 Catholic Regional Youth Pilgrimage. (George P. Matysek Jr. )
Prior to the pilgrimage, youths learned about the Catholic ministries that reach out to shut-ins, those in need and the imprisoned of the region. The teens, most of whom were confirmation candidates, were encouraged to be Christ’s presence to others throughout the year.
“We all have people we know who are shut-in or who never get calls,” said Deacon Harold Bradley of the Mountain Maryland Four. “How hard is it to pick up the phone or visit someone who is alone? You’ll be amazed how the Holy Spirit will work through you.”
Parishes that participated in this year’s pilgrimage included Our Lady of the Mountains (made up of Ss. Peter and Paul, St. Patrick in Cumberland, St. Mary in Cumberland, St. Patrick in Mount Savage and St. Ambrose in Cresaptown); the Mountain Maryland Four (made up of St. Michael in Frostburg, St. Ann in Grantsville, St. Joseph in Midland and St. Peter in Westernport) and St. Peter in Oakland.
After attending the Palm Sunday Mass at St. Mary, the youths enjoyed a dinner and concert by a Christian rock group, “Longing for Eden.”