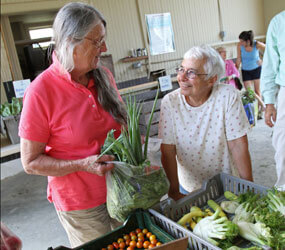 STANFORDVILLE, N.Y. – Who knew that Catholic social teaching was a glorious assault on the senses?

At Sisters Hill Farm in Stanfordville, it has the taste of sweet crisp carrots, the fragrance of fresh basil with dark loamy dirt still attached to its roots, and the sight and sound of winged insects pollinating bright orange zucchini blossoms. It feels like the warm breeze that blows papery skins from the wooden table in an open barn where onions are trimmed and bagged.

Walking the six acres under cultivation, farm director Sister Mary Ann Garisto told Catholic News Service, “This farm epitomizes all of the aspects of Catholic social teaching: in giving to charity, in building community and in being good to the earth.”

Sister Mary Ann is a Sister of Charity of New York. She said her congregation has sponsored the farm since 1999 as an expression of its reverence for creation and an extension of its mission of education and service to the poor.

The farm grows more than 100 varieties of some 30 vegetables and herbs without using pesticides or chemical fertilizers. It participates in community-supported agriculture, which means it has shareholders – 225 of them – who receive weekly distributions of fresh produce in exchange for a contribution that covers the production costs and pays the farm staff a living wage.

The annual harvest weighs in between 65,000 and 80,000 pounds. Sister Mary Ann said at least 10 percent of the bounty is distributed to soup kitchens and food pantries in and near New York and Stanfordville.

The Sisters of Charity received the property as a bequest in 1916. They oversaw it as a farm operation until the Second World War, when they let the land go fallow because of a labor shortage. The sisters continued to use the spacious former hunting lodge on the property as a vacation getaway from their work in New York City, 100 miles to the south. They also allowed local farmers to plant hay on some of the 140 acres.

Sister Mary Ann said re-establishment of the farm grew out of the sisters’ 1995 assembly, which identified women, the earth and people living in poverty as their focus for the new millennium. She said, “We wanted to reverence creation in a spirit of interconnectedness.”

It took several years for the community-supported-agriculture idea to take root within the congregation, but Sister Mary Ann persisted. The Brooklyn-born former high school biology teacher said she was inspired by the new cosmology writings of Passionist Father Thomas Berry and Genesis Farm, a community-supported venture sponsored by the Sisters of St. Dominic in Blairstown, N.J.

“Community-supported agriculture gets people in touch with how their food is grown and provides them with wonderful, wholesome food,” she said. “We don’t use any chemicals. We give the crops healthy soil. And just like humans, plants that are not stressed will be immune to diseases.”

The lanky Binghamton University graduate aspired to be an organic farmer and was intrigued by the opportunity to develop a sustainable operation, literally from scratch. Sister Mary Ann described him as “a Renaissance man,” adept at farming, drafting, construction, mentoring apprentices and supervising volunteers.

She said Hambleton embodies the farm’s mission and is largely responsible for the operation’s self-sufficiency. Sister Mary Ann said the farm has produced more than 600,000 pounds of nutritious food since it was re-established.

Hambleton said there is a steep learning curve in farming and he has developed useful systems to work efficiently and effectively to maximize food production.

“I look at the farm and try to promote a balance that emulates nature,” said Hambleton, who has a bachelor’s degree in environmental studies. He described planting cover crops after harvest to restore nitrogen to the soil naturally, leaving areas unmowed to create diverse habitats and attracting beneficial insects with flowers.

Hambleton builds on the Sisters of Charity education mission by hiring two apprentice farmers each year and organizing the ongoing efforts of volunteer shareholders. He said more than 120 people inquire online each year for the apprenticeships and he selects self-motivated, open-minded candidates who demonstrate a fierce work ethic and are likely to be fun to work with throughout the April to November season.

In addition to living and working at Sisters Hills Farm, apprentices visit members of a collaborative regional alliance for farmer training to see unique aspects of other operations.

“I am looking to train people who are going to run farms,” he said. He prides himself that the graduate apprentices are well-equipped with skills and confidence and know how to access information when they leave the farm. Hambleton said many former apprentices now work as farmers or in related fields.

A core group of volunteers weed, harvest and help with other farm chores. Sister Mary Ann said it’s an opportunity to build community with the shareholders, some of whom respond to e-mail blasts advertising “weeding and wining” sessions. On a recent weekend, 20 volunteers met to harvest 5,488 cloves of garlic and hang them in bunches of 10 in a drying barn.

Hambleton said volunteers are a key distinction between the sisters’ farm and a private undertaking. “It’s very rewarding to me that people give freely of their time to help here. Community is an important aspect.”

He described Pete, a volunteer who has dug as many pounds of rocks from the soil as Hambleton has harvested produce in 12 years. “Our knees have touched every inch of six acres and we know this ground more intimately than anyone ever has. If it were my own farm, there wouldn’t be a Pete,” he said.

The Sisters Hill Farm community includes Hambleton’s schoolteacher wife and their two young sons. Hambleton designed and built his own home on several acres he bought from the sisters.

“I can’t explain it, but it’s something mystical,” she said. “The Spirit pervades this place. It’s truly holy ground. Our food is so good because it’s grown with love and reverence.”