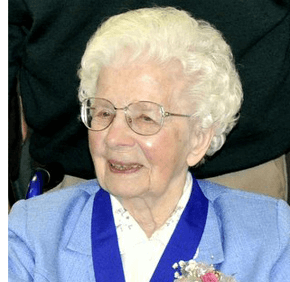 By Catholic Review Staff
A memorial Mass for School Sister of Notre Dame Genevieve Kunkel is to be offered at 10 a.m. Sept. 29 in the chapel at Villa Assumpta in Towson. Sister Genevieve died Aug. 6. She was 101 and had been a religious sister for 78 years.
A native Baltimorean, whose father and uncle founded Kunkel Pianos in 1905, Sister Genevieve professed first vows in 1934.
She earned a bachelor’s degree in English and history in 1932 from what is today Notre Dame of Maryland University in Baltimore and a master’s degree in English from Boston College in 1940.
Sister Genevieve taught from 1932 to 1961 in schools from Massachusetts to Florida. She taught at St. Mary School in Bryantown in Charles County from 1932 to 1933 and was superior of the house and principal at St. Patrick School in Cumberland in Allegany County from 1953 to 1956.
In 1961, Sister Genevieve became director of sister education and supervisor of secondary schools for the Baltimore province of her congregation, based at what is today Notre Dame of Maryland University. In 1980 she became a consultant in education for the province.
In 1990, Sister Genevieve moved to Villa Assumpta in Towson where she provided pastoral care to religious sisters. She moved to the nursing center adjacent to Villa Assumpta in 2008.
Sister Genevieve is featured in a 2011 article in the Catholic Review – one month after her 100th birthday – where she is referred to as a rosy cheeked School Sister. Sister Genevieve is featured in a chapter in David Snowdon’s 2001 book, “Aging With Grace: What the Nun Study Teaches Us About Leading Longer, Healthier, and More Meaningful Lives.”
As a participant in a study that began in 1986, Sister Genevieve met with Snowdon periodically for face-to-face evaluations, mouth swabs and blood samples. Her body is being donated to science.
Copyright (c) Aug. 9, 2012 CathoicReview.org
PrevNext