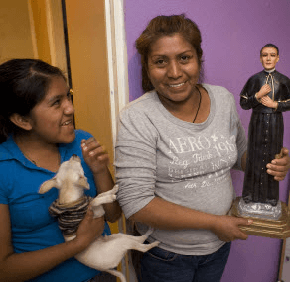 VATICAN CITY – Catholic devotion to the saints appears to be alive and well, and Pope Benedict XVI continues to proclaim new saints at a regular pace.

The official calendar of saints’ feast days will grow in October when the pope canonizes seven men and women, including Mother Marianne Cope of Molokai and three laypeople: the Native American Kateri Tekakwitha, the Filipino Peter Calungsod and the German Anna Schaffer.

The canonization Mass Oct. 21 will be one of the first big events of Pope Benedict’s Year of Faith, which is designed to commemorate the 50th anniversary of the opening of the Second Vatican Council and to launch a strengthened commitment to the new evangelization.

According to Cardinal Angelo Amato, prefect of the Congregation for Saints’ Causes, the appeal of the saints and their concrete examples of holiness give them “an undeniably positive role to play in this time of new evangelization,” since they are living proof that the church is holy.

In a new book, currently available only in Italian, Cardinal Amato writes that it’s easy to understand how people can question the church’s holiness when they see the sinful behavior of some of its members. But the good, loving and charitable activities of other members are the best evidence that the church truly is the holy body of Christ, he says.

“The holiness of the church is not the sum of the holiness of its children, but is a spiritual gift received from the spirit of the Risen Christ,” he writes. “Throughout history, the church carries the treasure of its holiness in earthen vessels. Being aware of that, the historic church can do nothing other than continually convert to the cross of Christ.”

The saints and martyrs officially recognized by the church are the “demonstration that the church, even if it is not already perfect, given the misery of many of its sons and daughters, is not less holy, but continues to produce the fruits of holiness and always will.”

Individual Christians and Christian communities thus have an obligation to pursue holiness “to counterbalance the humiliations” Christ’s body suffers because of the sins of its members, he writes.

For Jesuit Father Paolo Molinari, who served as an expert at Vatican II and shepherded Blessed Kateri’s sainthood cause for 55 years, saints are not mythic heroes but real men and women who show all Christians that it’s possible to live holy lives no matter where they were born or what their state of life.

It’s not a matter of demonstrating extraordinary courage in a dangerous situation, but “living an ordinary life in an extraordinary way,” a way that “comes from the spirit of Jesus poured into our hearts,” Father Molinari said in an interview with Catholic News Service.

Another great thing about the saints, Father Molinari said, is that they are ready, willing and able today to help the church’s members along the path of holiness.

The Second Vatican Council “purified” exaggerated practices related to the veneration of the saints, for example, where the faithful would “enter into a church and go to the statue of St. Anthony or St. Rita and touch it, but not even think that the Lord is present in the tabernacle,” he said.

But the council still emphasized the fact that those friends of God are part of the church and will intervene on behalf of those still living on earth, he said.

Veneration of the saints, the Jesuit said, is a sign of “the link between the pilgrim church (on earth) and the ones who have gone to God.”

Blessed Kateri is, like all the saints, still part of the Catholic family, concerned about the needs of her kin, Father Molinari said; and so, “being with God, she will probably whisper into the ear of God something of what we say to her.”