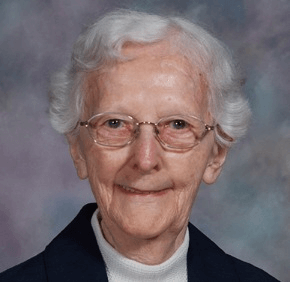 A funeral Mass for Sister Anne McMahon of the Sisters of St. Francis of Philadelphia was offered Oct. 7 at Assisi House in Aston, Pa. Sister Anne died Oct. 4. She was 98.

Born in Scariff, Ireland, Sister Anne entered the Sisters of St. Francis of Philadelphia in 1936 and professed her first vows in 1939.

She ministered in the Archdiocese of Baltimore for 26 years, teaching at the former Shrine of the Little Flower School, the former St. Anthony of Padua School and St. Elizabeth School – all in Baltimore – as well as at St. Joseph School in Fullerton.

Sister Anne, who earned a bachelor’s degree in social science from Neumann University in Pennsylvania, also ministered in the Archdiocese of Philadelphia for 14 years and the Diocese of Charleston for 18 years.

In 2009, she moved to Assisi House, where she served in prayer ministry until her death.