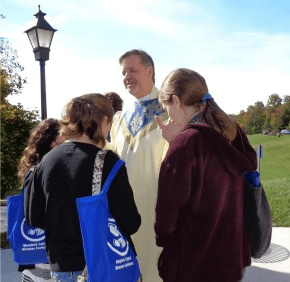 By Karen Sampson Hoffman
Special to the Catholic Review

EMMITSBURG – “It’s that connection – woman to woman,” Jeanne Link, chairperson of the Maryland Catholic Women’s Conference, said. “It’s for us to be involved with other women.”
The fifth annual Maryland Catholic Women’s Conference met for a two-day conference and retreat at Mount St. Mary’s University in Emmitsburg Oct. 10-11, as an opportunity for women to grow deeper in their faith, and to grow closer to one another as sisters in Christ.
The retreat, this year named “SEEK – A Retreat: Relax, Refresh, Discover,” began with Mass celebrated by Archbishop William E. Lori in the university’s Chapel of the Immaculate Conception. Singing and swaying conference-goers completely filled the more than 100-year-old chapel before Mass, as the band Radio League played contemporary Christian music.
Archbishop Lori began with words sent by Apostolic Nuncio Archbishop Carlo Maria Viganò, who is the personal representative of Pope Francis in the United States.
“I assure you of the Holy Father’s spiritual communion with you and his blessings on your conference,” the archbishop relayed. “I am confident that this time of retreat will deepen God’s presence in Maryland.”
“It is my prayer that this will be a weekend to experience the beauty of prayer,” Archbishop Lori said. “That you will be renewed in your vocations, in all that you do for your families, at work and in society.”
The gathered women had the opportunity to appreciate the Blessed Virgin Mary as a “true mother” to each of them and to the church, he said, as well as her closeness to Jesus and to them in prayer. The archbishop reflected on the Gospel reading for Mass, in which a woman in the crowd praised the woman who gave birth to Jesus and he responded that “blessed is the person who hears the word of God and keeps it.”
In Pope Francis’ recent visit to the United States, the archbishop said, he challenged Catholics to be “disciples who have fallen in love with Christ and allow him to transform every aspect of our lives.”
“The pope was in our midst as a missionary person,” Archbishop Lori said. “He came to do for us what he is asking us to do for others – to listen, much as mothers do for their children – in such a way that we lead others back to Christ and his Church. “
As mothers and women, the archbishop asked the conference-goers to reflect on Mary’s presence.
“Mary embodied the spirt of love, spirit of charity, that advances the Gospel in the world,” he said. “Let us ask Our Lady’s help for the big things and the small things of life.”
Friends Sue Parker of Browns Mills, N.J., and Bernadette Kovalsick of Edgwood were among the women attending this year’s conference. The weekend event, they agreed, was a well-needed and faith-filled retreat.
“I’m loving it!” Parker said. “It’s my mommy weekend. Or as my friend calls it, my ‘mommy Sabbath.’ It’s bringing me back to myself, my rejuvenation. It’s wonderful to find women you can communicate with.”
“It’s a chance to share faith, our Catholic faith,” Kovalsick said.
The weekend was highlighted by individual break-out sessions and keynote addresses by Elizabeth Ficocelli, an author, speaker and radio host, who shared her experience of entering the Catholic Church and the gift of the sacrament of reconciliation. She is a wife and mother of four sons.
“Everyone has a mission,” Ficocelli said during her first keynote session. “It is our job through prayer to find out what that is.”
See also:
Maryland Catholic Women’s Conference meets in Emmitsburg
African woman professes perpetual vows in Arbutus
Sylvia ‘Cookie’ Harris honored with Culture of Life medal
PrevNext