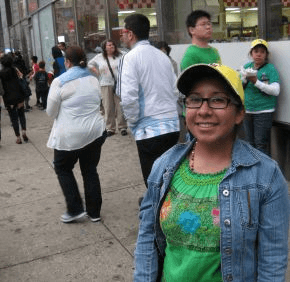 PHILADELPHIA – They did not get through security and to the papal Mass proper, but the pilgrims from the Hispanic community of St. Joseph in Cockeysville soaked up the Pope Francis experience just the same.

“Oh, I saw him,” insisted Katherine Martinez, a senior at Dulaney High School who left El Salvador five years ago.

As she and other St. Joseph pilgrims stood in a massive bottleneck on 18th Street in Philadelphia, still several blocks from Pope Francis’ final Sept. 27 Mass in the U.S., it became clear that they wouldn’t make it inside. Phones were deployed, and the crowd hushed to view live-streams of the liturgy.

Destination reached or not, all were thankful for the journey, including the bus transportation coordinated by Catholic Review Media and sponsored by the Archdiocese of Baltimore.

Liliana Chaparro, who emigrated from Mexico about eight years ago, summed it up:

“It was awesome because our community just had fun.”
Fun for her community revolves around three things – music, prayer and food.

During the two-hour ride from Cockeysville to Philadelphia, the group began with a recitation of the rosary, after which Remberto Lopez got out his guitar. The whole bus sang folksy songs from Latin America, about God, Jesus and, of course, the Blessed Virgin.

Marimar Trejo, “bus captain” for St. Joseph in Cockeysville, checks the map in Philadelphia. (Erik Zygmont | CR Staff)“We believe that he who sings once, prays twice,” explained Trejo, originally from Mexico, who served as bus captain and kept the group of 53 more or less together in Philadelphia.

“We know a lot of different songs that are familiar and lift up the spirit, and, honestly, it helps the time go by.”

Rather than be packed onto subway trains like sardines, the group instead opted to walk the five miles from the Philadelphia stadium parking lots to Benjamin Franklin Parkway.

Pedro Lopez kept up the group momentum with an unending series of exuberant chants:

Rough translation: “It is seen; it is felt. The pope is here.”

In downtown Philadelphia, that was obvious. Pope Francis was everywhere – inside restaurants as a cardboard cut-out, glued to the top of sticks carried through the crowds and on every LCD screen in the city.

“He’s very special,” said Pilar Muñoz, who left the Dominican Republic for the U.S. in 1999. “He’s not just somebody who’s over there at the Vatican. He’s showing us he cares for the poor, the sick, for everyone.”

“He’s the best, I guess,” commented Nelson Monry, a landscaper who came from Guatemala 14 years ago. “He loves everybody.”

Though massive and with the single-minded goal of reaching the pope, the Philadelphia crowds largely conformed to the “Love is our mission” way. With little breathing room, the packed streets were nevertheless hospitable to small children or the elderly. Police officers high-fived pilgrims as they passed while National Guard troops offered cordial “hello”s. There were a few signs and bullhorns proclaiming that the hundreds of thousands of Catholics streaming through the streets were catastrophically wrong, but the pilgrims simply passed on their way with a greeting and song.

After hearing that security was no longer letting people into the Mass, the St. Joseph pilgrims – sharing chips, sandwiches and fruit throughout their odyssey – found a video screen at 16th Street and settled down below the pope’s bowed and contemplative visage as communion was distributed.

Back on the bus, they obliged the pope’s concluding words to the Mass: