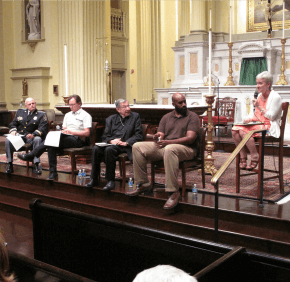 By Erik Zygmont
ezygmont@CatholicReview.org
The need for more regulation of firearms is there, a four-person panel asserted at St. Ignatius in Baltimore Sept. 21, but at least one panelist had major doubts as to whether there is sufficient will.
“If the tragic death of children in Connecticut – if that didn’t move this nation to think about meaningful reform … we’re not going to see it in our lifetime,” said Baltimore County Police Chief Jim Johnson, who is also chairman of the National Law Enforcement Partnership to Prevent Gun Violence.
Johnson shared the stage with Firmin DeBrabander, professor of philosophy at the Maryland Institute College of Art; Joshua Smith, pastor of intentional living at Gallery Church in Baltimore; and Bishop Denis J. Madden, auxiliary bishop and urban vicar of the Archdiocese of Baltimore. The panel, sponsored by St. Ignatius, was moderated by Mary Ellen Russell, chairwoman of the Maryland Catholic Conference.
“Tonight, we’re not here to debate this matter,” clarified Jesuit Father James Casciotti, pastor of St. Ignatius, as he introduced the panel, “but to examine it in light of Catholic social teaching and the position taken by the U.S. Conference of Catholic Bishops.”
“The bishops have never called for the repeal of the right to have a handgun or a hunting rifle, but we’re looking for some kind of regulation,” Bishop Madden said.
He noted that he had personally testified in Annapolis as the General Assembly passed the Firearm Safety Act of 2013.
The bishop also spoke about gun violence from the perspective of his experience as a clinical psychologist working with violent offenders.
“The people we saw all had problems with anger, temper control and violent behavior,” Bishop Madden said, adding that most could also be diagnosed with either an organic brain disorder or character disorder.
A perceived insult, he said, could lead these “short-fuse” individuals to pick up a gun and use it, but if there were no guns readily available, “they usually would not resort to getting a knife or some other weapon,” and would instead “destroy the house.”
“More often than not, it was only because a spouse had hidden the guns that lives were saved,” Bishop Madden added.
DeBrabander, author of “Do Guns Make Us Free: Democracy and the Armed Society,” would clearly answer “no” to the question posed in the title of his book.
“The evidence of the harm that widespread gun ownership does in America is overwhelming,” he said, adding that the U.S. “sticks out” among other democracies in “the amount of gun-related violence we have.”
DeBrabander added that he believes the National Rifle Association makes “a lot of political arguments” that make it difficult to regulate guns.
“They argue that the main reason the second amendment was written was to preserve the sovereignty of this democracy,” he said, adding that he believes the NRA “has been so successful” because it has promulgated the argument that “guns are necessary for freedom,” and that the second amendment gives citizens means to protect their other rights.
DeBrabander, however, said that some “lawyers and historians say that the NRA interprets the second amendment in its origins incorrectly.”
The words “militia” and “well-regulated,” he argued, indicate that the passage is “more nuanced” than a blanket guarantee of the right to firearms for the populace.
DeBrabander also asserted that rather than protect freedom of discourse, guns do the opposite.
“I believe they undermine that freedom greatly,” he said.
For an example, he stated that Texas’ recent legalization of “campus carry” had been “promulgated by men with long, black assault weapons.”
“What does this mean for debate, and for the freedom of assembly?” he asked. “The first amendment is simply not compatible with the second amendment, when pushed to a certain extent.”
Smith spoke of the direct impact of gun violence on those it affects the most – inner city youths.
“The summer was horrible,” he said, adding that a 10-year-old he works with had witnessed a grandmother and another youth get shot.
The violence, Smith said, begets “retaliation after retaliation after retaliation.”
A mentor to inner city youths, Smith said he always finds himself praying, “Please God, don’t let it be one of mine.”
He also commented on the ease of obtaining a gun in the city: “as easy as me going to get a pack of cigarettes.”
One audience member noted that suburban mass shootings, such as Columbine and Sandy Hook, are usually treated as a separate issue from daily inner city violence. “Are these issues separate?” he asked.
“I think your question is a good one and there are a lot of layers to it,” Smith replied, noting that the popular separation of the two issues can be ascribed to “narratives” including “the weaponization of blackness.”
There’s a sense, he said, that “there’s something wrong with them” when white people commit massive acts of violence, whereas murder among blacks is popularly seen as an act committed by “that black thug – that’s just who they are,” Smith said.
He added that much black-on-black violence can be ascribed to “a lack of love of self.”
“We have a lot of hopeless young black men who grew up in a messed-up city.”
One audience member, identifying himself as an NRA member and a hunter, questioned Johnson specifically on the Firearm Safety Act of 2013, which he said was “geared not toward criminals, but you regulated law-abiding citizens who pay taxes.”
He asked Johnson if he believed the new restrictions were “working effectively” in reducing gun deaths.
“I respect your position on this issue,” Johnson said, noting that he is also a hunter and target-shooter.
“I do think the Maryland ban on assault weapons is effective,” he added. “I think we’ll need time to see its effect on deaths.”
DeBrabander argued that “it is preposterous to think that these jurisdictions can do it on their own.”
“We need federal efforts,” he said.
PrevNext