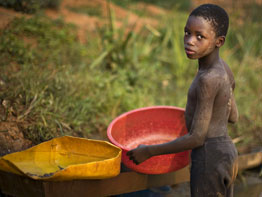 CAPE TOWN, South Africa – The African continent and the Catholic Church there have undergone tremendous changes since the 1994 Synod of Bishops on Africa, yet poverty, justice and reconciliation remain major issues for this October’s synod.

The 1994 synod “opened with the tremendous tragedy of Rwanda and ended with the miracle of Nelson Mandela’s inauguration as president of South Africa,” said Jesuit Father Peter Henriot, director of the Jesuit Center for Theological Reflection in Zambia’s capital, Lusaka.

This October’s special Synod of Bishops for Africa will focus on “service, peace and reconciliation and look at the challenges we need to pay attention to,” he said.

Pope Benedict XVI is scheduled to present the synod’s working document March 19 in Cameroon, on a trip that also includes a visit to Angola. Bishops planning the October synod have emphasized the need to find concrete ways to apply results of their 1994 meeting “to an Africa thirsting for reconciliation and seeking justice and peace.”

In interviews with Catholic News Service, church leaders spoke of how Africa has changed since 1994 and the challenges that remain.

U.S.-born Father Henriot, who has lived in Zambia since the late 1980s, said poor African countries “have become more entwined with globalization” since 1994.

“We have become more influenced by the economic and military concerns of other countries,” Father Henriot said. For example, a structural adjustment program imposed on Zambia by the World Bank and the International Monetary Fund “might have made the economy more efficient, but it has no social face,” he said.

“We have lower literacy levels, a high AIDS rate and other health concerns,” Father Henriot said, noting that such programs led to “curtailed budgets that had a negative impact on hospitals and schools.”

“With the global economic crisis, the poor are becoming poorer with factors such as the price of basic foods in African countries being affected by skyrocketing prices in First World countries,” he said.

Some Catholic officials spoke of how African countries are taking more responsibility for helping each other.

“To gain credibility internationally as a democratic continent,” African leaders need “to hold each other accountable,” said Jesuit Father Anthony Egan, a member of South Africa’s Jesuit Institute who specializes in history and ethics.

Since 1994, “there have been strong developments in efforts to combat corruption,” Father Egan said, noting that the African Peer Review Mechanism, an African self-monitoring system for member states of the African Union, was set up in 2003.

Although African leaders “have failed in terms of calling (Zimbabwean President Robert) Mugabe to order,” there are signs that this reluctance “to be seen attacking a fellow African leader” is changing, he said.

South African Cardinal Wilfrid Napier of Durban, one of three papally appointed presidents of the October synod, said Catholic leaders in many African countries have been coming to South Africa for help with setting up effective justice and peace structures. Countries such as Sudan, Rwanda, Congo, Ethiopia and Malawi are looking to Catholics in South Africa to show how they recovered from the years of the strict racial segregation system of apartheid.

For instance, he said, in December he and Father Sean O’Leary, director of the institute, traveled to Burundi, which had emerged from years of civil war. Burundi’s church leaders were seeking help setting up a truth and reconciliation commission on the lines of the South African commission that dealt with human rights abuses under apartheid.

“We also went to Sudan to share information on how the church in South Africa dealt with issues of justice” during and after apartheid, Cardinal Napier said, noting that “we share stories to enable the church in other countries to strengthen our successes and eliminate our pitfalls in their own work.”

Cardinal Napier spoke of other changes to the Catholic Church in Africa.

He said that since the last African synod, the Inter-Regional Meeting of Bishops of Southern Africa, representing Catholics in nine countries, “has held at least three successful conferences, focusing on self-reliance, strategic planning and good governance.” Other regional bishops’ conferences have had similar meetings.

On the continent, interreligious dialogue, especially between Christians and Muslims, “has improved enormously,” the cardinal said. He noted that Archbishop John Olorunfemi Onaiyekan of Abuja, Nigeria, co-chairs the African Council of Religious Leaders that was established in 2003.

He also said social communications have improved with the setting up of Catholic radio stations in many African countries.

The political landscape in many countries has changed, too. Since the 1994 Rwandan genocide, in which an estimated 937,000 people were killed, the country has undergone a “gradual democratization,” said Father Egan.