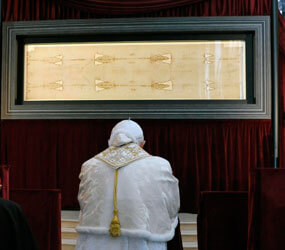 VATICAN CITY – With the Shroud of Turin now carefully put away, church officials said that more than 2 million pilgrims had come to venerate the linen cloth in the six weeks it was on display.

During the April 10 to May 23 exposition, officials said 2,113,128 people from around the world passed through the Turin cathedral to catch a glimpse or say prayer before the cloth revered by many Christians as the shroud that covered the body of the crucified Christ.

In a news conference May 22 marking the closing of the exposition, Cardinal Severino Poletto of Turin said that he was pleased with the record number of people who came to see the cloth.

“I had the clear perception that the Lord was speaking to the hearts of the pilgrims who came before the shroud seeking answers,” he said.

The shroud “gives us the chance to offer faith in a time of confusion and spiritual fog, reconciling in the word of God,” the cardinal said.

Cardinal Poletto also said in an interview with Vatican Radio May 22 that at the exposition pilgrims are given the chance to “contemplate the suffering of Christ, of which the shroud is a mirror, both wonderful and precisely what the Gospel tells us.”

Pope Benedict XVI went to Turin May 2 to venerate the shroud and celebrate a public Mass. He called the shroud an “extraordinary icon” that had been “written with blood: the blood of a man flagellated, crowned with thorns, crucified and wounded on his right side,” exactly as the Gospels say Jesus was.

The pope said that the shroud was a symbol of the resurrection of Christ, and that “in it we see reflections of our suffering in the suffering of Christ.”

The Vatican has never said that the shroud, a 14-foot long linen cloth marked by a shadowy image of a man, is actually the burial cloth of Jesus Christ, although many Christians believe it is.

The shroud has been the object of several multidisciplinary scientific analyses, but its exact nature and age remain mysteries. Carbon-14 dating performed on a tiny piece of cloth in 1998 showed that the cloth probably came from medieval times, but some scientists have called that evaluation into question.

The shroud, kept in a special case filled with inert gas to prevent alterations, usually is out of public view in the left transept of the Turin cathedral.