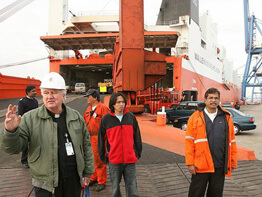 Imagine living away from family and friends for months, facing isolation, depression, and loneliness while working backbreaking, sometimes 24-hour shifts on a container ship in foreign ports; sometimes with insufficient food, nothing to foster spirituality, delayed paychecks, meager entertainment and limited recreational time.

Such is the reality for some merchant marines who labor intensively on the bleak-looking ships docked at Dundalk Marine Terminal and other Baltimore ports.

Their lighthouse beam, however, comes in the form of ship visitors – volunteers who welcome these men from Indonesia, Maldives, China, Croatia, the former Yugoslavia, Romania, Russia, Poland, Lithuania, Ukraine, Bulgaria, Philippines, India, Italy, Spain, Portugal and the remainder of the world.

“People never know they’re here,” said Monsignor John L. FitzGerald, leader of the Archdiocese of Baltimore’s Stella Maris Apostleship of the Sea (AOS) ministry which caters to seafarers while in port. With ports not even visible from the main roads, passers-by can’t comprehend what these seafarers are enduring, he said. Thirty-four nationalities of all religions and cultures are listed in his center’s visitor log book.

When seafarers spot an Apostleship of the Sea hardhat and vest, they identify a good Samaritan close at hand. As the heart of the ministry, ship visitors greet the foreigners – many whom are Catholic – with reading material, rosaries, books, and phone cards for the crews to call home.

“It’s really amazing to see their expression when they get through to their loved ones,” said Mark McArdle, 54, who claims he is not a boat person yet sidles up the slippery, steep and rickety gangways leading to the mammoth container ships. A parishioner of St. Louis, Clarksville, Mr. McArdle volunteers as an AOS ship visitor every other week.

If a crew has time and visas to go ashore, ship visitors will transport them by van to the Stella Maris Seafarer’s Center in Dundalk where they can relax in front of the television or computer, or play ping pong and billiards. Shopping at Walmart or Eastpoint Mall is an option as well as an occasional visit to a Baltimore tourist site.

“The mission is basically welcoming a stranger,” said ship visitor Bob Chrest of St. Mark Fallston. “It’s interesting and different than any other parish work I can think of.”

Climbing up the gangway isn’t so bad, said 77-year-old ship visitor Jack Garvey of St. John the Evangelist, Severna Park, “It’s going down.” He didn’t end up in the water on one particularly windy night but he could have. Familiar with Stella Maris (star of the sea) from his days in overseas ports as a merchant marine is one of the reasons Mr. Garvey signed up as a three-day a week ship visitor.
He described many of today’s ships as “just barely livable.”

“The crews are just trying to make a living; they don’t get paid very much,” he said. “When we show up and take them ashore for a couple of hours, they really appreciate that.”

Brother James Horan, S.J., has been ministering to seafarers for 12 years and is a member of the national AOS USA, a 90-year-old Catholic hospitality service. Brother James is the longest-serving ship visitor.

“I had a ship once with a half bag of potatoes on it and that’s about all,” remembered Brother James.
“They were fishing in the Baltimore harbor to get food. They were told by their captain if anyone reports any difficulties; he would retaliate by harming their families.”

Some ships are better than others, he said

“Equipment-wise they can be unsafe; the lifeboats or the emergency electrical system may not work,” he said. “I help them figure out how to get it fixed. We also get involved in times when they are not paid for months while their families are waiting for the money back home.”

It’s magic, he said, when crew members see the AOS logo on the Jesuit’s hardhat and shirt three days a week, standing for “who I am, what I represent and what they can expect of me. It’s a wonderful experience. I love the work.”

Monsignor FitzGerald remarked that he would be a ship without water without the support of ship visitors. He hopes to double the number on his list.

“Ship visitors are the mainstay and lifeline of this ministry,” he said. “Everything leads up to visiting ships.”