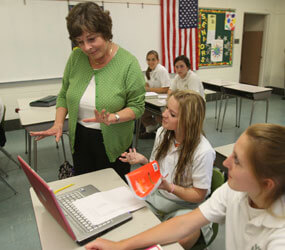 When she was a sophomore at The Seton Keough High School in Baltimore 13 years ago, Jennifer Casey was unsure where her life was heading.

She was admittedly quiet and shy, and says now that she certainly didn’t think that she had “any special talents when it came to being a student of literature and writing.”

The longtime English teacher at the all-girls school saw greatness bubbling under Casey’s reserved surface during her honors American literature and composition class.

Kenney praised Casey’s writing and encouraged her to pursue it further, speak up in class and begin working on the school’s literary magazine.

“She helps students to develop self-confidence, to see the gifts that they have and to use these gifts to make a positive impact – to not sell themselves short, to act with dignity and respect,” Casey said.

Now, the two women are colleagues in Seton Keough’s English department, and Kenney remains a life-altering mentor for all students and approaches teaching as a form of entertainment.

“It’s always a challenge to take the kids out of their own world – whether it is good or bad – and present them with a beauty and an insight that may be new to them,” said Kenney, who is also the senior class moderator.

Kenney came to Seton Keough when it was created in 1988 from a merger between Archbishop Keough High School and Seton High School. She joined Keough’s staff in 1972 after marrying her husband the previous summer.

Raised in Harrisburg, Pa., she attended the only Catholic high school in the area. Her Catholic school experience and her family’s faithful dedication were crucial to her formation.

She graduated from the since-closed St. Joseph’s College in Emmitsburg, a women’s school founded by St. Elizabeth Ann Seton. Her mother, Catherine Regan Shartle Sariano, also attended the school but did not graduate. Still, Kenney and her friends did not know a woman other than her mother who had been to college. A bar was set.

“I was thrilled to be given the opportunity of going to college, as in 1967 this was not always an option for women,” Kenney said, “especially for women from large Catholic families.”

Now, in the 21st century, she still wants female students to relish their education. Each day is gift, she said.

“Seton Keough education is my career and my passion,” Kenney said. “These are great kids who come to us for an education but also love, understanding and belonging. We try to give them all of these in an atmosphere that is safe and nurturing. I’m a mother of three sons and that has been so wonderful, but at my school I also get to have thousands of daughters.”