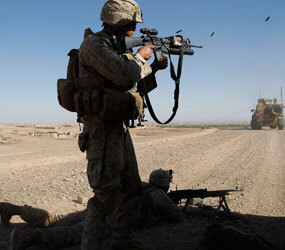 WASHINGTON – When the United States had a military draft, conscientious objector status was mostly sought by people who opposed all war and wanted out of military duty altogether.

But in the decades since the country has had an all-volunteer military, conscientious objection has almost always been about people who volunteered for military service, but once in came to have moral qualms about the specific conflict where they were expected to fight.

A new campaign is seeking to ease the path for what is known as selective conscientious objection.

Logan Mehl-Laituri spent more than six years in the Army, including a 14-month combat stint in Iraq as an artillery forward observer, responsible for directing weapons fire to targets.
Camilo Mejia spent nearly nine years in the Army and the Florida National Guard, reaching the rank of staff sergeant and deploying to Iraq as an infantry squad leader in 2003, just before his eight-year commitment was to expire.

Despite their years of military experience and their willingness when enlisting to go to war, during their deployments to Iraq, both men decided they had serious doubts about the morality of that particular war and that they wanted out.

Mehl-Laituri succeeded in receiving an honorable discharge, just as his unit was being sent back to Iraq for a second tour.

Mejia took a course he wouldn’t recommend to others. During a two-week home leave, six months into his Iraq tour, Mejia decided not to return to his base because of his grave moral doubts about the war. After five months in hiding, he held a news conference to explain his situation and turned himself in to military authorities.

He was court-martialed, convicted of desertion and served nine months in prison. Both Mejia and Mehl-Laituri unsuccessfully sought conscientious objector status. Mejia has exhausted his military appeals and is now pursing a federal court judgment.

Today, they’re both speaking in support of a new report from the Truth Commission on Conscience in War, available at www.conscienceinwar.org, which calls for revising U.S. military regulations to allow individuals to object to serving in a particular war. A 2007 report by the Government Accountability Office reported 425 people sought conscientious objector status between 2002 and 2006. Of those, 224 were approved.

The commission is the work of people representing more than 70 organizations – churches, peace activists, veterans groups and academics. The commissioners include Catholics, Muslims, Orthodox, Protestants and Buddhists. Following release of the report on Veterans Day, the group sponsored education sessions on selective conscientious objection and an interfaith prayer service.

At a news conference in Washington Nov. 10 and in testimony for the commission report earlier this year, Mejia and Mehl-Laituri eloquently explained their philosophical objections to the Iraq War and how they came to believe they had a moral obligation to stop serving in combat. Both told Catholic News Service that their efforts to understand the moral issues raised by their involvement in war led them to study religious teachings about just war – particularly those of the Catholic Church.

Mejia, who attended a Jesuit high school, said his Catholic education gave him the grounding to know the moral doubts he had about the war were worth heeding.

Mehl-Laituri, now a graduate student at Duke University Divinity School, rattles off references to the work of theologians through the centuries, noting the report’s release date coincided with the feast of St. Martin of Tours, patron saint of soldiers. Currently in the Rite of Christian Initiation for Adults studies, he said he has come to believe that some of the post-traumatic stress disorder experienced by returned troops stems from the kind of moral conflict that led him to decide he couldn’t return to Iraq in a combat role.

“The long-term impact (of that moral struggle) can be devastating at the emotional, communal and moral levels,” he said. “Self-condemnation can be so severe it can lead to suicide.”

Mejia described an incident in Iraq that was key to his conclusion that the conflict did not meet just-war criteria for proportionality and minimal impact on civilians. That day the lieutenant heading his unit had caught a young boy who’d thrown a stone at their vehicle and was preparing to take the barefoot, raggedy child back to the base.

A crowd gathered, pleading for the boy to be released. One of the community elders, with tears in his eyes, “savagely beat” the boy to show the officer that the child would be dealt with locally, Mejia said. The boy was released to the community.

Mejia said he understood the officer’s response – often children were used to throw explosives at passing soldiers and this event might have discouraged others in the community from acting against soldiers, “yet I could not find it within me to support the beating of a child in that way.”

Mejia’s duties in Iraq at a detention center also included using psychological tactics he considers to be torture, he said in testimony to the truth commission in March.

Since 1971, the U.S. Conference of Catholic Bishops has supported selective conscientious objection, reiterating it in documents that include statements about the draft, a 1983 pastoral letter on war and peace, “The Challenge of Peace: God’s Promise and Our Response,” and a 1993 follow-up to the pastoral, “The Harvest of Justice Is Sown in Peace.”

The Rev. Herman Keizer Jr., a retired Army chaplain and commission member, said when he was assigned to the Pentagon in the early 1990s, selective conscientious objection nearly became a part of the military code. The retired colonel and minister of the Christian Reformed Church served in Vietnam and Cambodia, where he was wounded twice.

“We had the undersecretary for personnel and readiness, his senior personnel command, senior attorneys at the Department of Defense” all supporting changing the code to allow selective conscientious objection. But then Rev. Keizer was reassigned and his successor wasn’t as interested in pursuing a change to the code.

Gerry Powers, director of Catholic Peacebuilding Studies at the University of Notre Dame’s Kroc Institute for International Peace Studies, was the USCCB international policy director at the time of the effort to change the code. He said such across-the-board agreement was rooted in the recognition that “the moral presumption a soldier gives to the legitimate decisions of political leaders about going to war is more difficult than what the average citizen goes through.”

Military leaders at that time knew it was to everyone’s advantage to not have personnel in combat if they were struggling with the choice of following his or her military oath or following a sincere moral conclusion that a war is unjust, Powers said. As a practical matter, the military had long had a process to exempt individuals from service for moral reasons if their job was going to put them in the position of launching nuclear weapons, Powers said.

“The refusal to recognize selective conscientious objection creates a morally incoherent policy that is, in practice, unnecessary,” he added.