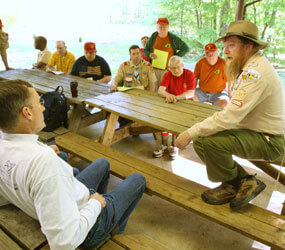 WHITEFORD – After trustworthy, kind and clean, the last of the 12 ideals in the Scout Law is reverent.

According to the Boy Scouts of America, that takes into account respecting the beliefs of others, which is what assorted Boy Scouts, Girl Scouts, Cubs, Brownies and others in uniform learned during a recent Interfaith Retreat at Camp Spencer, in the northern reaches of Harford County.

Camp Spencer is part of Broad Creek Memorial Scout Reservation, where more than a thousand boys per week will spend summer camp.

It doesn’t just bustle in June, July and August, however, as several hundred youths and adult leaders showed on the first weekend in May, during a retreat where a kosher kitchen is kept, Protestants can make a Rosary and Catholics turn to Mecca during morning prayer.

“For the longest time, there were two retreats, one for Catholics, one for Protestants, on the same weekend,” said Al Linke Jr., the longtime Scoutmaster of Troop 354 at Our Lady of Hope in Dundalk, who was there for the very first in 1962. “In the late 1980s, we blended more and more.

“Now, we’re reaching out even more.”

One picnic table over, Theresa Spliedt, a parishioner of Ascension in Halethorpe and leader of Girl Scout Troop 496, nodded toward Mickella Harris, a Brownie, and Angel Lea, a Junior Girl Scout.

“It took a while for us to get invited,” said Spliedt, who explained the importance of the event. “I’m missing my granddaughter Alyssa’s fourth birthday party. You start with two (Mickella and Angel), they’ll go back and be ambassadors.”

Vital to that goodwill are Rabbi Rachmeil Tobsman and Monsignor Thomas L. Phillips, the pastor of St. Gabriel in Woodlawn and chaplain of the archdiocesan Catholic Committee on Scouting Leadership.

“Jews had their own separate retreat,” said Tobsman, “then I said to Father Tom, ‘can we bring the communities together?’ He pushed to make the whole kitchen kosher; this is our second year kosher. Father Tom and I believe in an ecumenical experience for everyone.”

In place of a hymn at the Seder meal served for Saturday lunch May 1, Tobsman led everyone in the singing of Bob Dylan’s “Blowing in the Wind.” Monsignor Phillips then explained that the Eucharist began at the Seder.

“We are doing what Jesus did at the Seder meal,” Monsignor Phillips said. “At the meal, he took the cup. … It is our common hope that we will all be saved, and all be one.”

A few hours later, in that same pavilion, he led a reconciliation service that used the Scout Law as the examination of conscience. The program included a blue post-it note, to “write those things that need to be changed in your life,” and instructions to read it to a minister or priest.

The papers were collected and burned, while “asking God’s forgiveness.”

“The way we do it (reconciliation) is somewhat unorthodox,” said Monsignor Phillips, on a weekend that stresses commonalities over differences. “Islam has its prayers; we have the Liturgy of the Hours.”

With that, Monsignor Phillips displayed the Breviary application on his iPod.

The times are changing, indeed.