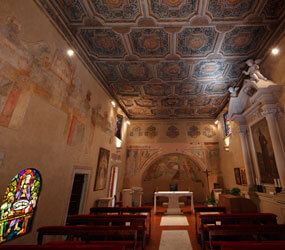 VATICAN CITY – The Swiss Guards have the colorful uniforms and the heroic legends, but the Vatican police and firefighters have the ancient church.

Actually, the Church of San Pellegrino inside the Vatican once belonged to the Swiss Guards and still is decorated with the coat of arms of each commander of the corps from 1517 to 1982.

But since 1977, the church has been the chapel of the 150 Vatican gendarmes, as the police are called, and the 30 Vatican firefighters.

Their chaplain, Monsignor Giulio Viviani, celebrates Mass in the church daily at 7 a.m. and usually stays in his office there until about 8:30 a.m., in case one of the men wants to talk or go to confession.

The rest of his day is spent fulfilling the obligations of his full-time position as an official in the office coordinating papal liturgies.

Other than during the summer, he also offers the police and firefighters topical religious education classes, such as explaining what the Eastern Catholic churches are and how members of the Eastern hierarchy dress. That way, the police officers will know a bishop when they see one and salute, as tradition dictates.

Monsignor Viviani said one of the first of his weekly classes in the fall will be about synods of bishops and about Christians in the Holy Land, so that when the officers start greeting and guarding members of the special Synod of Bishops for the Middle East in October, they’ll know what’s going on.

One of the most popular segments in his catechesis, he said, is the Advent series of guided visits to the other churches and chapels inside Vatican City, including the Sistine Chapel and the Redemptoris Mater Chapel in the Apostolic Palace.

“There are people who work at the Vatican for a lifetime without seeing anything but the place they work,” the chaplain said.

And, there are some who get so used to seeing Pope Benedict XVI that they seem to take it for granted.

But in the five years he has served as chaplain for the safety officers, he said, “I’ve always admired their great, great respect, admiration and devotion to the Holy Father.”

Even though they are at home at the Vatican and work at large papal gatherings, “they, too, feel very small compared to the events they are involved in. They are privileged witnesses and they recognize that,” he said.

During the summer, when the pope and most Vatican employees are away, only about a half dozen people attend the morning Mass in the chapel, which seats about 50, he said.

The men, he said, “are like any other men. They come to Mass when they can. But unlike the Swiss Guards, who must live in the Vatican, the gendarmes and firefighters live outside, and I am pleased when they are involved in their parishes and go to Mass with their families.”

Monsignor Viviani spends most of his time with the new gendarme recruits, who live in Vatican barracks behind their chapel.

The Swiss Guards now use the 16th-century Chapel of Sts. Martin and Sebastian, which is closer to their barracks near the Apostolic Palace.

The gendarmes and firefighters honor as their chapel’s patron St. Peregrinus, which translates literally as San Pellegrino in Italian or St. Pilgrim in English.

According to tradition, on the occasion of his coronation in the year 800, Charlemagne donated to the little church relics of St. Peregrinus, the first bishop of Auxerre in modern-day France.

Monsignor Viviani believes the church was first known as “The Pilgrim’s Church,” because it was the last stop on Via Francigena, the ancient pilgrim route to St. Peter’s Basilica.

Another possibility is that it was named in honor of a Pellegrino or Peregrinus martyred in Rome in the second century along with Sts. Eusebius, Vincent and Pontian.

The chapel has existed, in some form, for more than 1,200 years. Vatican documents mention that in 806, Pope Leo III donated a silver lamp to the chapel.

In the apse fresco of Christ Pantocrator, or Christ in Majesty, fragments of the original fresco – probably from the 9th century – are still visible. But the bottom section of the fresco was removed in 1590 when the chapel was restored and the floor was raised more than six feet because of repeated flooding.

A chunk of wall bearing a fresco of Mary with the Child Jesus, the centerpiece of the lower level, was cut out and stuck to the back of a new altar that almost completely covered the remaining apse fresco, Monsignor Viviani said.

When the chapel was restored again in 1977, the Marian fresco was discovered, carefully removed from the chunk of wall, framed and hung on a side wall.

Monsignor Viviani said that even though the Swiss Guards have their own chapel now, they do return on the third Monday of each month and on All Souls’ Day to honor the commanders commemorated there and the fallen guards who were buried in the courtyard of San Pellegrino until 1870.