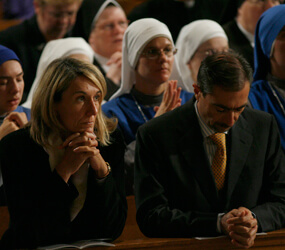 WASHINGTON – Many people might say their mothers are saints but very few have an official church declaration to back it up.

Fifty-year-old Laura Molla, daughter of St. Gianna Beretta Molla, is one of those people.

St. Gianna, often called the “pro-life saint,” was canonized in 2004 by Pope John Paul II for having put her unborn child’s life before her own. In 1962, when she was pregnant with her fourth child, doctors discovered a large ovarian tumor that required surgery. Although surgical procedures at the time called for removal of her entire uterus, Gianna Molla, 39, insisted surgeons only remove what was necessary and allow her baby to live.

She pleaded with family and doctors: “If you must decide between me and the child, do not hesitate. Choose the child, I insist on it, save the baby.”

When she died of an infection – a week after giving birth to Gianna Emanuela – the Italian saint left behind not only her newborn, but her husband, Pietro, and three other children including Laura, who was just shy of her third birthday.

Molla, who now works in the furniture business in Italy, said that even through she didn’t know her mother, she has learned a lot about her in recent years.

What particularly stands out is how much her mother loved life. She enjoyed skiing, hiking, going to the theater and wearing the latest fashions. She juggled a career as a medical doctor with being a wife and mother. Through reading her mother’s letters and notes on spirituality, Molla has also come to understand the depth of her mother’s faith.

“We had to work through the shock of losing our mother to find the joy in knowing she is a mother for all,” Molla told Catholic News Service Sept. 11, the day before she addressed participants at a eucharistic congress at the Basilica of the National Shrine of the Immaculate Conception in Washington sponsored by the Council of Major Superiors of Women Religious. The theme of the Sept. 11-12 congress was “Sacrifice of Enduring Love.”

Molla’s mother, born in 1922 near Milan, Italy, was described by Pope John Paul at her canonization ceremony as a model of virtue, holiness, motherhood, professionalism and devotion to the faith. He said she followed Christ’s example of loving one’s “own in the world and loving them to the end.”

She was beatified in 1994 during the International Year of the Family, and 10 years later, one week after Mother’s Day, she was named a saint.

During the May 16 canonization ceremony at St. Peter’s Square, the crowd of 40,000 also included Pietro Molla and three of the couple’s children. One of the children, Mariolina, died in childhood. The Molla children live in Italy; Pierluigi, the oldest, is an engineer and Gianna Emanuela, the youngest, is a physician.

Molla described the canonization ceremony as beautiful and full of “a lot of happiness.” But what pleased her most about it was that her father, who had been sick, was able to attend.

She has self-proclaimed her 97-year-old father as a saint, saying through an interpreter: “Faith overflows in my father.”

She said her father never realized he was “living next to a saint,” and her mother didn’t realize it either.

Molla said her mother was convinced of her call to the vocation of marriage and “lived that until the end” – a commitment that Molla hopes will be an example to others.

“She teaches us to truly discern” what our vocation should be, she said, and then to “live that vocation to the fullest.”

Molla acknowledged she has faced her own set of vocation questions and turned, naturally, to her mother for advice.

“I asked my mother to give me light,” she said and then smiled and looked at Giuseppe Pannuti, her husband of seven years.

The tall, slender woman –- who exhibits her mother’s taste for fashion – is fully aware she has big shoes to fill. She described being a saint’s daughter as “a great joy and a huge privilege” and added that she often asks herself if she’s “worthy of this privilege.”

But in the midst of the nearly overwhelming example left by her mother, Molla also finds comfort in St. Gianna’s example of simply living out one’s faith on a daily basis.

As she sees it, her mother’s decision nearly 50 years ago was not an isolated choice. She told participants at the eucharistic congress Sept. 12 that her mother’s action was “the crowning of a whole life of virtue, a life lived constantly in the light of the Gospel as a young woman, physician, spouse and mother.”

When she hears people question the choice to leave behind three children in order to give birth to a fourth, Molla insists her mother was convinced her unborn child had the same right to live as her other children.

“She did not choose death” but “at that moment she chose the life of her child.”

As proof that her mother wanted to live, Molla recounts stories that her father told her of how her mother flipped through fashion magazines at the hospital finding outfits she wanted to wear when she left.

“She was a very happy woman,” Molla said, adding that her mother “loved life until the end” and knew to “accept everything God gives us – even suffering.”