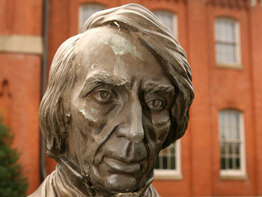 A bust of the first Catholic Chief Justice of the United States may get booted from its prominent perch in front of Frederick’s City Hall if a group of civil rights activists gets its way.

Pointing to Chief Justice Roger Taney’s role in writing the controversial Dred Scott v. Sanford decision that declared blacks to be non-citizens and that made slavery legal in all territories, members of the Frederick chapter of the NAACP are calling on city leaders to take down the bust.

The movement has drawn a mixed response from the Catholic community, with some leaders arguing that it is wrong to remove a piece of art honoring a historic figure while others said the move could promote a sense of healing.

Guy Djoken, head of the NAACP in Frederick, did not return numerous calls and e-mails from The Catholic Review requesting comment about the controversy.

“We can look back and say the decision was a mistake and contrary to the teachings of the church, but he still was an important historic figure of the time,” said Monsignor Martin Feild, pastor of St. Joseph in Taneytown. St. Joseph’s marriage records include a Jan. 7, 1806 entry noting the wedding of Chief Justice Taney to Anne Key – sister of Star Spangled Banner author Francis Scott Key.

“He was interpreting the constitution as he saw it at the time,” said Monsignor Feild. “Eventually everyone began to realize he was wrong – just as everyone hopefully will understand the abortion decision was wrong.”
Monsignor Feild noted that once people begin taking down historic figures of controversial Americans, it becomes difficult to make distinctions. He pointed out that former presidents George Washington and Thomas Jefferson were both slaveholders.

“If we do it with Taney, should we do it for them?” he asked.

Father Michael Roach, pastor of St. Bartholomew in Manchester and a local church historian, said Chief Justice Taney was a very important leader and a “pillar of the church.”

Chief Justice Taney was one of the longest-serving chief justices, leading the court from 1836-1864. Chief Justice Taney lived many years in Frederick County where he was a parishioner of St. John in Frederick.
The chief justice, also a former Maryland Attorney General, U.S. Attorney General and U.S. Secretary of the Treasury, was a close friend of Father John DuBois, founder of what today is Mount St. Mary’s University in Emmitsburg and a former pastor of St. John. Chief Justice Taney was instrumental in supporting a public lottery that raised money to build a church at St. John. He is buried in the parish’s cemetery.

“Taney was regarded as a very good Catholic,” said Father Roach.
The historian noted that by the end of the 1850s, the political strength of the anti-Catholic Know-Nothing party was lessening, but many Americans continued to “despise” Catholics.

“It’s pretty impressive that he made it to the Supreme Court,” Father Roach said.

The pastor said he finds it “embarrassing that we’re trying to rewrite history” by removing the bust of Chief Justice Taney.

Glendora Hughes, general counsel for the Maryland Commission on Human Relations and a parishioner of St. Francis Xavier in East Baltimore, said she is sympathetic to those who are offended by the bust’s presence in such a prominent spot in Frederick.

“The symbolism of the statue is similar to having a confederate flag in the south,” she said. “It represents a constant reminder that you are not equal. It sends a message that creates fear or reminds people of the vestiges of racism that still exist today.”

Ms. Hughes said discussion of the bust has led to a helpful wider dialogue about issues of race in Frederick County.

The Frederick controversy is not the first one to confront a Taney statue. After some Annapolis residents called for the removal of a similar bust in Maryland’s capital, a compromise was reached when a statue of Justice Thurgood Marshall – a civil rights proponent – was added near the site of the Taney bust.