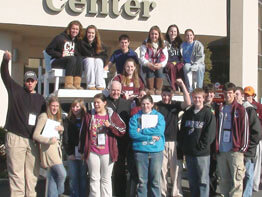 OCEAN CITY – Mark Pacione walked to the front of the Clarion Hotel’s Grand Ballroom Nov. 22 with a large task ahead of him. It was 10:30 p.m. and the hundreds of teenagers filling the room were buzzing, unable to come down from the energy rush of a two-hour dance, which had concluded. They jumped around anxiously and yelled playfully at friends merely two feet away.

The 750-plus participants in the Baltimore Youth Catholic Conference had finished a note-perfect, sing-along to current pop hit “I’m yours” by Jason Mraz when Mr. Pacione grabbed a microphone.

A co-worker sitting about 100 feet away leaned over to an observer and assuredly whispered, “This is where Mark is in his element. He loves this.”

The director of the Division of Youth and Young Adult Ministry for the Archdiocese of Baltimore, whose office was running the three-day event, answered his challenge by singing an old African-American spiritual.

Mr. Pacione continued singing and eventually the teens joined in singing for the next five minutes in a serene scene.

Asking the Lord for guidance was a regular occurrence during the three-day event, which gathered youths from more than 60 Maryland parishes and some 20 Catholic high schools together to explore and energize their faith. It was an exploration of prayer through skits, songs and workshops. Attendees were called to embrace the power of God and take ownership of his earthly gifts. The simple, but haunting lyrics of “Rescue Me,” permeated nearly every session.

“It’s just the ability to connect with people you’ve never even met before who are crazy for God, crazy for Jesus and who are filled with a kind of spirit you really don’t feel back home,” Sacred Heart of Glyndon parishioner Marvin Roxas said.

Mr. Pacione was still smiling the morning after, just hours before the conference’s close.

“We had everybody up and dancing, and it was really a great night,” he said. “It was time to put this in proper perspective. We dance because of God. We dance in joy because God gives us joy. To come together in that moment of prayer, it was a very special moment for all of us.”

It was an extraordinary moment in a weekend that reached consistently beyond the ordinary. The teens were, Mr. Pacione said, ready to heed the call of the weekend: search and rescue.

“Young people, more than other generations before, are truly excited to grab that task and go rescue the world in so many ways,” Mr. Pacione said. “If you’re going to rescue, though, you need to be strong. Everybody works out. We have a lot of Catholics here who are ready to rescue. They came here to work out. They came to strengthen themselves.”

Some teens entered the weekend carrying the cynical baggage of their lives at home. They left on the edge of being transformed. Archbishop Edwin F. O’Brien celebrated a Mass for the Baltimore Youth Catholic Conference Nov 23, where he encouraged the teens to thank God for the “wonderful experiences you’ve had” and the “chances to relight the fire” placed on them through baptism.

“It’s definitely strengthened my faith,” Elena Gage, a sophomore at Catonsville’s Mount de Sales Academy said. “It’s definitely opened my eyes more to how to pray and to show charity.”

The biennial conference in Ocean City has become one of the archdiocese’s marquee events – namely because it puts the responsibility of faith and evangelization in the hands of the teens in attendance.

Groups like the Archdiocesan Youth Advisory Committee, composed of high school juniors or seniors at the parish level, helped run the event and performed in various message-oriented talks.

Buses arrived in the early evening of Nov. 21, bringing teens from as far north as Harford County to as far west as Allegany County.

St. John the Evangelist, Hydes, parishioner Marybeth Arcodia arrived curious if the event would take on the intimidating fervor of “speaking in tongues” as she heard in similar conferences.

Instead, she found comfort in the camaraderie of strangers.

“This is my first time coming and everybody’s so nice,” Marybeth said. “When I get on the elevator and people are like ‘Hey!’ – I have no idea who they are.”

The attendees took the song of “Rescue Me” throughout the hotel in a procession of candles, all the way to the back deck of the ocean-side hotel. Hundreds of voices sent their pleas into the cold night air with only the sounds of the ocean’s waves crashing nearby.

“Rescue is what we’re about,” Mr. Pacione said. “We’re an evangelizing church. We get out there and proclaim the word of God … we carry the word of God in our hands and our feet. We try to rescue the world and bring it to some kind of healing.”