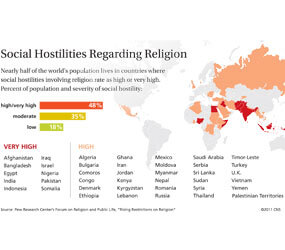 WASHINGTON – Close to one-third of the world’s citizens have faced increased restrictions on religious practice and expression imposed on them by their respective nations’ governments, according to a study issued Aug. 9 by the Pew Research Center’s Forum on Public Life.

The report, “Rising Restrictions on Religion,” noted that such limitations are on the upswing in only 23 of the world’s 198 nations, and that many of those countries are among the world’s most populous and fastest-growing in population, affecting a higher percentage of the world’s residents.

By contrast, 12 nations were judged to have eased restrictions on religion. But the Pew report suggested that those countries “already scored low” in previous studies, while nations imposing greater restrictions “already had high or very high levels of restrictions or hostilities.” No changes were reported in 163 countries.

During a three-year period, between mid-2006 and mid-2009, the study examined a total of 33 measures phrased as questions about government restrictions such as laws, policies and actions, and social hostilities such as acts of religious hostility by private individuals, organizations and social groups. The study used 18 widely cited, publicly available sources of information, including reports by the United Nations, the U.S. State Department, Human Rights Watch and Amnesty International.

Pew said the sources “were combed only for factual information on specific policies and actions,” not for commentary or opinions.

“Only about 1 percent of the world’s population lives in countries where government restrictions or social hostilities declined,” the report said.

“Social hostilities involving religion in the United States remained at a moderate level,” the report said. “In recent years, the U.S. annually has had at least 1,300 hate crimes involving religious bias, according to FBI reports.”

The most populous nations where restrictions increased in the three-year study period were Egypt, France, Algeria, Uganda, Malaysia, Yemen, Syria, Somalia, Serbia, Tajikistan, Hong Kong and Libya. Egypt, Algeria, Yemen, Syria and Libya have been part of the rolling wave of “Arab Spring” protests aimed at reforming – and, in some cases, removing – long-entrenched governments.

Greece, with half of Syria’s population, was the largest nation where religious restrictions decreased, followed by Togo, Nicaragua, Macedonia, Guinea Bissau and East Timor. The other countries with declines have fewer than 1 million citizens.

The most populous nations where social hostilities rose were China, Nigeria, Russia, Vietnam, Thailand, the United Kingdom, followed by three European nations each with fewer than 10 million citizens: Sweden, Bulgaria and Denmark.

Nations with declines in social hostilities were, by population size, Tanzania, Chad, Kyrgyzstan, Lebanon and Liberia.

Christians faced harassment in more nations than any other religious adherents – 130 nations, followed by 117 nations for harassment of Muslims, 75 for Jews, 27 for Hindus and 16 for Buddhists. Christians and Muslims account for about half of the world’s population.

The 10 nations with the highest levels of government restrictions on religion were, in order, Egypt, Iran, Saudi Arabia, Uzbekistan, China, the Maldives, Malaysia, Burma (Myanmar), Eritrea and Indonesia.

The report noted the rise in hostilities across Europe, particularly France and Serbia.

“In France, members of Parliament began discussing whether women should be allowed to wear the burqa, and President Nicolas Sarkozy said the head-to-toe covering was ‘not welcome’ in French society,” the report said. “In Serbia, meanwhile, the government refused to legally register Jehovah’s Witnesses and several other minority religious groups.”

“Governments sometimes restricted religious broadcasting or literature in less direct ways,” the report said. “In April 2009, for example, the Catholic Church reportedly was pressured by the Zambian government to relieve a priest of his duties after he strongly criticized the government on his popular radio program.”

As an example of how a government decreased its restriction on religion, the study pointed to Nicaragua. “In Catholic-majority Nicaragua, for example, the government stopped enforcing a 2006 law – known as the ‘noise law’ – that some evangelical Christian groups claimed was restricting their ability to organize outdoor worship services.”