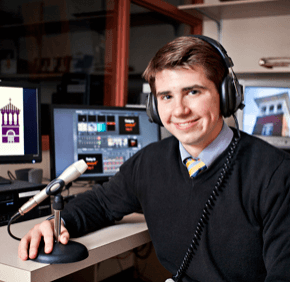 By Paul McMullen
pmcmullen@CatholicReview.org
Don’t be afraid to ask for help.
Whether responding to the only blemish on his 12-year academic career, getting interviews with prominent figures for a 5,000-watt radio station in Annapolis or the message he sent his peers in a 12-minute video, that credo has worked quite well for Michael Singleton.
With an expertise in math and interests ranging from European history to water polo, Singleton has an impressive resume, but what makes the 18-year-old distinctive is his willingness to delve into a most painful topic.
When he graduates June 1 from Mount St. Joseph High School in Irvington, his legacy won’t be the honors he attained, but the way he encouraged the school community to talk about suicide.
While most junior service projects at the school involve a soup kitchen or shelter, Singleton’s was a video titled “Isolation to Identity: Preventing Depression Related Suicide.”
The project grew out of regular visits to Mount St. Joseph by Donna Curley, whose son, Colin, a 2002 graduate of the school, lost his fight with depression and took his life in December 2006, at age 22.
Every October since 2009, Curley has addressed small groups of Mount St. Joseph students about the need to talk, before their issues become too much to bear.
“I tell the boys about depression, and the need to talk about it,” Curley said. “It’s uncomfortable territory for young guys. We need to decrease the stigma, and the only way that is going to happen is if we talk about it.”
Moved by Curley’s message and several other suicides, including Jim McCandless, a successful baseball coach in Severna Park, where he spent years in the Green Hornets program, Singleton mobilized family, friends and fellow Gaels.
His mother, Karen, is credited as casting director in the video. The Mount St. Joseph Class of 2016 includes his twin brothers, Jack and Gus. The former has a brief speaking part, the other’s guitar work is on the soundtrack.
Singleton’s interview subjects include Father Leo Patalinghug, Catholic Review columnist and Mount St. Joseph Class of 1988 graduate.
Assistance was also provided by Singleton’s father, John, a telecommunications consultant, and Steve Peroutka, the founder of National Pro Life Radio, who had recruited the older Singleton to contribute to his arts and entertainment show on WNAV-AM.
They in turn brought on Michael, who over the last two summers has supplied interviews that have aired on the show. They have included a substantial dose of Mount St. Joseph grads, such as real estate developer Edward St. John and former Detroit Lions coach Jim Schwartz.
In the same way that his junior service project implores teens to seek help, Singleton got those interviews because he wasn’t afraid to ask for them.
“I like to hear successful people talk,” Singleton said. “That’s one reason I do the radio show.”
That venture has led to some hilarity.
Singleton was among a team of students working a detail that incorporated the Xaverian ideals – compassion, humility, trust, simplicity and zeal – in a paint project when he stopped to answer his phone.
“Mr. (Jason) Ader wanted to know why I was answering the phone in the middle of painting,” Singleton said. “When I told him it was Dan Duquette (the Orioles’ general manager), he said ‘Go, go.’ Mr. Ader is a big Orioles fan.”
That same chutzpah was evident when Singleton finally experienced seeing something other than an A on his report card.
He credits St. John the Evangelist School in Severna Park and its principal, Sister of St. Joseph Linda Larsen, with helping him win a full academic scholarship to Mount St. Joseph, where he finally experienced a B, as a freshman in the second quarter of Joe Cegelski’s Honors Algebra II.
“I went to get help from Mr. Cegelski in homeroom,” Singleton said, “and sought out the guys smarter than me.”
He returned to Cegelski for calculus classes that qualify for advanced placement I and II credits.
Singleton is also part of the Mount St. Joseph team in next month’s local qualifier for the National History Bowl. He has already been accepted by Notre Dame University in South Bend, Ind., and Mount St. Mary’s University in Emmitsburg, his father’s alma mater.
It was no surprise in October, when his high school tabbed Singleton to be a student speaker during the dedication of a new field house.
“God has blessed Michael with many talents, and he knows it’s important to share those with others,” said David Norton, the school’s principal. “His enthusiasm for life and his faith allow him the opportunity to do great things.”
Active in suicide prevention
Donna Curley and her husband, Kevin, a 1972 graduate of Mount St. Joseph, are active in the Maryland chapter of the American Foundation for Suicide Prevention (AFSP).
“Suicide is the second leading cause of death in college students,” Curley said.
She is chairwoman of “Party For Life,” a crab feast that will be held in June, and they are regular participants in the “Out of the Darkness Walk,” held every fall.
Last October in Columbia, the “CMC for Life” team, which remembered Colin Michael Curley, included Todd Ferguson and Cody Lentz, who played on the Mount St. Joseph freshman lacrosse team in 2006. Colin Curley was among their coaches.
The Curley family, which includes sons Ryan, 28, and Patrick, 24, also graduates of Mount St. Joseph, worships at Church of the Resurrection in Ellicott City.
For more information, visit afsp.org or call 1-800-273-TALK (8255)
Also see:
Catholics in the Archdiocese of Baltimore to participate in national March for Life
PrevNext