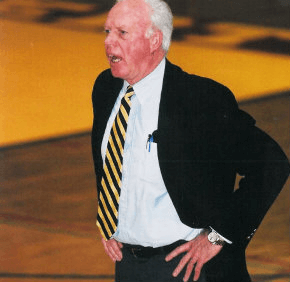 By Paul McMullen
pmcmullen@CatholicReview.org
Jerry Savage has witnessed a basketball game in just about every gym in the Baltimore area.
Now he will have a court to call his own.
Loyola Blakefield will dedicate its floor Jan. 19 to Savage, who coached the Dons’ varsity from 1968 to 2003 and served the Towson school as its athletic director for 27 of those years.
A brief ceremony will take place before the Dons’ 2 p.m. game against St. Maria Goretti of Hagerstown, which features big man Martin Geben, who last winter won the Baltimore Catholic League’s Jerry Savage Player of the Year Award.
The BCL attached his name to that honor in 2003, when Savage retired with more than 600 victories and a half-dozen championships.
“This is quite a surprise,” Savage told the Catholic Review in a phone interview Jan. 10. “I’m grateful that they would do something like this. Loyola was very good to me. I’m very fortunate that I spent so much of my career at a great place, dealing with great kids.”
During the program’s heyday in the 1970s, Savage sent Pete Budko to the University of North Carolina and Tony Guy to the University of Kansas. Whether Loyola Blakefield was producing top recruits or sending out a five more likely aiming to play college lacrosse, the Dons’ strong fundamentals were apparent.
Josh Davalli, the Loyola Blakefield coach since 2005, was a rival in the mid-1990s, when he played for the late Ray Mullis and then Bryan Moorhouse at Cardinal Gibbons.
“We played four times my senior year (1995-96), and split,” Davalli said. “Coach Savage was already an iconic figure in the Baltimore Catholic League. His teams played tough, smart, and we always knew they were going to be well-prepared.
“Loyola had Coach Savage, Gibbons had Coach Mullis. Mark Amatucci was coaching at Calvert Hall, Cokey Robertson at Goretti, William Wells at St. Frances Academy, that was a unique period for the league. That got me into coaching, that those guys enjoyed the game so much.”
A New Jersey native, Savage was recruited by coach Jim Phelan to play for what is now Mount St. Mary’s University in Emmitsburg. As a senior in 1961, he helped the Mount to the NCAA College Division semifinals and set a school record for career free throw percentage that stood for several decades.
Later that year, he took a teaching and coaching position at Mount St. Joseph High School in Irvington, where his first junior varsity team included Dan Popera, who went on to become the winningest coach in the history of Archbishop Curley High School in Baltimore.
In 1968, Savage took charge of the varsity at Loyola Blakefield, replacing Ed Hargaden, for whom the school’s football and lacrosse stadium is named.
Savage’s family became intertwined with the Dons, as sons Michael and Kevin played and Jim helped as a statistician before returning to the school as a junior varsity coach.
When he isn’t helping commissioner Jack Degele run the BCL, Savage, 75, is likely to be taking in Catholic Youth Organization games that include Kevin’s triplets, Alexandra, Lauren and Courtney, who are fourth-graders at St. Mark School in Catonsville.
He is just as proud of his two granddaughters at Carver Center for Arts and Technology in Towson.
“Rachel is into visual arts, and Clare is in dance,” said Savage, of his son Michael’s daughters. “Clare just had a big role in the Nutcracker.”
Savage and his wife, Pat, who taught math at Mount St. Joseph for 23 years, are parishioners of St. Agnes in Catonsville, where they were married June 29, 1963. On the occasion of their 50th anniversary last summer, they renewed their vows in the chapel at St. Mark, where the pastor, Father Christopher Whatley, is a family friend.
Also see:
Catholics in the Archdiocese of Baltimore to march for life
Monsignor Mieczkowski dies at 95
PrevNext