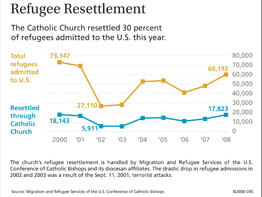 WASHINGTON – The number of refugees admitted to the United States in the fiscal year ending in September increased substantially over the previous two years, though it still falls far short of resettlements before the 2001 terrorist attacks brought changes to admissions requirements.

Of the more than 60,000 refugees admitted between October 2007 and September 2008, nearly 30 percent – 17,283 people – were resettled through Migration and Refugee Services of the U.S. Conference of Catholic Bishops.

The U.S. figures for 2008 include 13,823 Iraqi refugees. Of those, 4,234 – 31 percent – came in through the MRS network, according to Mark Sloan, associate director of processing operations for MRS.

As of June, with a quarter of the fiscal year to go, the U.S. had admitted only about a third of its target of 12,000 Iraqi refugees, so more than 8,000 came in the last three months.

Mr. Sloan said there currently are between 1.5 million and 2 million Iraqi refugees in Jordan, Syria, Lebanon and other parts of the region.

A target admissions quota set by the White House in September would allow 80,000 refugees this fiscal year. That includes 37,000 from the Near East region that includes Iraq. Mr. Sloan said the majority of those will be Iraqis, followed by Bhutanese and Afghans.

Another 5,000 visas are available for Iraqis who are classified as “special immigrants.” That includes people who worked for the U.S. government or U.S. contractors in the region and are considered to be at risk because of that association.

Mr. Sloan said so far MRS sees no reason the U.S. would not meet next year’s target for Iraqi refugee admissions. He cautioned that in a volatile region, refugee resettlement could be hampered by changes in political climate brought on by events such as a recent U.S. military raid into Syria targeting an arms-smuggling network.

In an Oct. 22 press release with the MRS data, Johnny Young, executive director of MRS, said diocesan agencies, parishes and other community entities “went above and beyond the call of duty to help refugees build new lives.”

The “bulge” in admissions in the last quarter of the fiscal year created strains on the dioceses that received the refugees, the release said.

Mr. Sloan said the majority of refugees expected to arrive this year are from Bhutan, Burma and Iraq.

“However, we may see the first arrivals of a new group of Eritreans from Shimelba camp in Ethiopia toward the end of the fiscal year,” he said in an e-mail reply to queries from Catholic News Service.

Refugees are admitted to a third country such as the United States after processing that includes extensive background screening in whatever country they are currently living in. The office of the U.N. High Commissioner for Refugees oversees that processing worldwide.