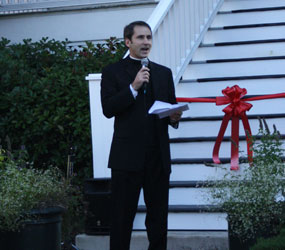 Once a stately family home and then a seminary for future priests, the Charles Carroll House of Annapolis is once again a hub of activity as the new location of the advancement office for the Redemptorists of the Baltimore Province.

The upper two floors of the 18th-century historic home – the birthplace and residence of the only Catholic signer of the Declaration of Independence – have been renovated to accommodate a 21st century office. The Redemptorist Office for Mission Advancement moved there in late September.

“Redemptorists have historic ties to Annapolis,” said Redemptorist Father Daniel Francis, the office’s director. “We arrived in 1853, and two holy men, St. John Neumann and Blessed Francis X. Seelos, have graced this property. I stand on the shoulders of many hundreds of men who have been stationed here.”

Built by Charles Carroll of Annapolis in the early 1700s, the stately home on the banks of Spa Creek is the birthplace of Charles Carroll of Carrollton, who served as the first federal senator from Maryland and one of the founding members of the Maryland State Senate.

The Redemptorists purchased the house – on Duke of Gloucester Street, next to St. Mary Parish – and its surrounding property from Carroll’s granddaughters in 1852 with the promise that it would be used for religious and educational purposes.

The Redemptorists, an order of Catholic missionary priests and brothers who arrived in the U.S. in 1832 to minister to German, Irish and Slavic immigrants, used the Carroll House as a residence for their students until the 1920s. The house then went unoccupied and, in large part, unused until the mid-1990s, when the bottom two floors were restored and opened to the public for guided tours.

“The rehabilitation of the top two floors of the Carroll House marks a significant new chapter in the preservation of this unique American treasure,” said Sharon A. Kennedy, vice chair of the Carroll House Board of Trustees. “With the 18th-century historic fabric carefully protected, the adaptive reuse of these rooms showcases the ability for modern uses and historic preservation to peacefully co-exist in the same space.”

Part of the renovation included the installation of strategically placed viewing panels that allow interpretation of key architectural details without interfering with a modern office environment.

The Redemptorist Office for Mission Advancement promotes the apostolic work of the Redemptorists of the Baltimore Province by partnering with people and inviting mutual stewardship of God’s gifts for the Redemptorists’ formation, retirement and ministry needs.

Kennedy said the new relationship between the Redemptorist tenants and the non-profit Charles Carroll House “will allow the Carroll House Board of Trustees to focus development efforts on education and outreach designed to introduce new and broader audiences to the Carroll family, early American Catholic history and the lessons to be learned from them today in this largely intact 18th-century landscape.”

In 1987, the Redemptorists helped create the non-profit Charles Carroll House of Annapolis, Inc. for the purpose of preserving the site and providing education about the Carroll family.

The group’s mission is to restore, maintain and interpret this historic site, provide for its sustainability and create opportunities to increase understanding and knowledge of the Carroll family and it subsequent stewards.