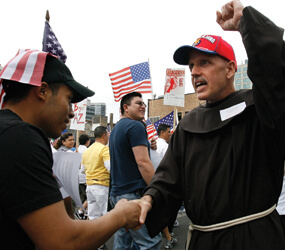 PHOENIX – About 10,000 protesters rallied May 1 at the Arizona State Capitol to demonstrate against the state’s new immigration enforcement law.

The law, which sets into place tough new standards, has galvanized immigrant rights groups around the United States.

It also resulted in a late-night April 29 session of the Arizona Legislature to limit the bill’s scope. Whereas the original bill, signed into law April 23, previously required law enforcement to make a “reasonable attempt” to determine legal status during “any lawful contact,” it now limits the reach to any lawful “stop, detention or arrest.”

Another revision states that law enforcement “may not consider race, color or national origin,” striking the word “solely” that many of the bill’s opponents took issue with.

Before the revisions, immigrant rights groups vowed to challenge the bill in court. Those speaking at a news conference where the vow was voiced included Dolores Huerta, sister-in-law of the late United Farm Workers union founder Cesar Chavez, and singer Linda Ronstadt, an Arizona native with both German and Mexican ancestry.

Frank Perez brought a group of traditional Mexican dancers from St. Catherine Parish in Phoenix to the May 1 rally, He said he turned out to support immigrant customs.

“We need to help each other in both the good and the bad times,” Perez said. “This is a hard time for Hispanic culture. With the help of our Lord and the Virgin Mary, we can pull through and build a bridge. We must live as one, as human beings.”

Juan Carlos Tapia, a member of St. Anne Parish in Gilbert, said he lives every day with the fear of being deported. He and his wife – who is also undocumented – have eight children, all born in the United States.

“We live with the fear of being separated from our children,” he said. “But through this demonstration, we can testify that God is with us. God can change the hearts of our legislators. I hope God will bring them clarity of thought so they can see how we are suffering.”

Nelson Severino of Casa Grande, while a legal immigrant from the Dominican Republic, fears the new law will lead to discrimination against all Hispanic immigrants.

“We come to work,” Severino said, adding that his children were born in the United States. “There’s a lot of criminals, but there’s also a lot of good people.”

“People need to be calm,” said Ron Johnson, executive director of the Arizona Catholic Conference, April 29, nothing that the law had not yet taken effect. “The local church is concerned with how this will be enforced.”

Ignacio Rodriguez, associate director of ethnic ministries for the Diocese of Phoenix, said his office was receiving lots of calls from concerned parishioners.

“They don’t know if they’re just going to get pulled over in the street,” Rodriguez said. “People are already looking to move back to Mexico or to other states like New Mexico and Texas.”

Jose Robles, director of diocesan Hispanic ministry, said he was pleased to see legal challenges to “this punitive law.”

He encouraged Catholics to turn to prayer. “There’s been a lot of emotion and media reporting on this,” he noted. “We’re asking our parishioners to remain calm, not to overreact to the situation. Don’t be paranoid.”

“Over the past several years, the United States has poured billions of dollars into immigration enforcement, which has not only not solved the problem but in some cases led to the abuse of migrants,” Bishop Wester said.

“We urge members of both parties to begin a process toward introducing and enacting bipartisan legislation which affirms the rule of law and basic human rights,” he added. “Our immigration system is badly broken and is in need of immediate repair.”