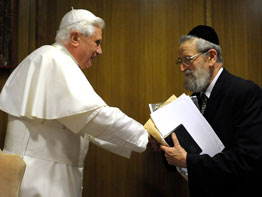 “I thank God who has kept us alive to be together and work for a future of peace and coexistence the world over,” the 80-year-old rabbi told the world Synod of Bishops on the Bible.

With Pope Benedict sitting nearby, Rabbi Cohen addressed synod members Oct. 6, telling them of the centrality of the word of God in Jewish life and prayer and its continuing relevance in responding to modern concerns, including promoting the dignity of human life, fighting promiscuity and secularism, and encouraging tolerance and peace.

But Rabbi Cohen made a veiled criticism of plans to beatify Pope Pius XII, who the rabbi and others say did not speak out strongly enough in defense of the Jews during World War II.

“We cannot forget the sad, the painful fact of how many, including great religious leaders, did not raise a voice in the effort to save our brethren, but chose to keep silent and help secretly,” the rabbi told the synod.

“We cannot forgive and forget it,” he said. “And we hope that you understand our pain, our sorrow over the immediate past in Europe.”

The rabbi also asked Catholic leaders to speak out against anti-Semitism and attacks on the state of Israel.

Rabbi Cohen told the synod, “We hope to get your help as religious leaders – as well as the help of the entire free world – to protect, defend and save Israel, the one and only sovereign state of the ‘people of the book,’ from the hands of our enemies.”

After his talk, Rabbi Cohen told reporters outside the synod hall that he felt an obligation to communicate the displeasure of many Jews over the possible beatification of Pope Pius.

“I did not want to offend anybody,” he said, but Pope Pius “should not be sanctified or looked up to because of his failure to save us, to raise his voice, even if he secretly tried to help” save Jews during World War II.

“Maybe he was afraid, or for other reasons known to him he did not raise his voice. And that we cannot forget,” Rabbi Cohen said.

Defenders of Pope Pius say he encouraged religious orders and Vatican-related institutions to open their doors and hide Jews fleeing Nazi persecution. They also say that his opposition to the Nazis’ policies was clear, but if he had spoken out the Nazis would have retaliated, leading to a greater loss of life.

In his speech to the synod, the rabbi said he accepted Pope Benedict’s invitation to be the first Jewish representative to address a synod as a sign of the Catholic Church’s desire to continue healing the “long, hard and painful history of the relationship between our people.”

As synod members prepared to discuss the word of God in the life and mission of the church, Rabbi Cohen told them the Jewish Scriptures – the Torah or first five books of the Bible, the “Nevi’im” or books of the prophets, and the “Ketuvim” or other writings, including Psalms and Proverbs – “are the source and inspiration of our prayers and our service of God.”

Scripture readings are the centerpiece of Jewish liturgy and all Jewish prayers are built around biblical quotations, the rabbi said.

Each person in the congregation, each person praying alone at home, prays from the Scriptures, he said.

“Thus, the many quotations from the holy Bible become part of the core personality of the one who prays, an integral part of his heritage,” he said.

Cardinal Albert Vanhoye, the former secretary of the Pontifical Biblical Commission, spoke after the rabbi, reviewing for synod members the teaching in the commission’s 2001 document, “The Jewish People and Their Sacred Scriptures in the Christian Bible.”