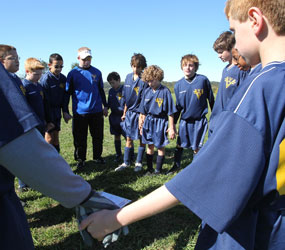 Children often dream of becoming the next LeBron James or Stephen Strasburg.

Some parents are willing to go to great lengths to push their children toward perceived greatness.

Travel teams, recreation leagues and elite club and Amateur Athletic Union (AAU) programs are considered to be the key amongst sports circles to reaching the pinnacle of athletic glory.

Amidst the “succeed at all costs” culture permeating sports, the Catholic Youth Organization, known by most as CYO, stands in stark contrast. Leaders say CYO isn’t promising a path to multimillion dollar contracts, but to heaven instead.

“CYO is not about winning the games,” said Margaret Brogden, the archdiocese’s CYO liaison and the coordinator for youth ministry formation. “Though winning is nice, it’s about forming disciples. It’s about helping these kids understand themselves as disciples of Jesus Christ.”

That idealistic image is a selling point to parents, as the archdiocese this year aims to re-emphasize prayer before games, sportsmanlike behavior and Christian values.

“Part of being evangelizers is being counter-cultural,” Brogden said. “That’s what we are. CYO is counter-cultural to other sport clubs and AAU. It’s different. We don’t apologize. In fact, we’re very proud of that.”

“I think it’s important that youth have something to do,” Jackson said. “I really think it’s for their health, their mind and for their own growth. We really work hard to make it a fun thing.”

CYO rules dictate that every member of a team must play. Jackson often hands out cards to parents who might get out of line in the stands. The cards read: “honor the game.”

While the notions seem antiquated, CYO is making connections. Both the soccer and basketball programs, for example, have thousands of young players each year.

Brogden said she wants to further strengthen ties between CYO teams and their respective parishes.

“They are connected,” Brogden said. “They’re not two separate things. It’s important for everybody to realize that, not just the youth minister, the pastor and the pastoral staff, but the coaches and the coordinator at the parish. It’s all together.”

Soccer chairperson Larry Triplett said some CYO teams have fields close to or on parish campuses, proximity that builds strong bonds between teams and their faith communities.

Father Michael S. Triplett, Larry’s son and associate pastor of Church of the Resurrection in Ellicott City, serves as chaplain for CYO soccer. Jackson would like a chaplain for basketball.

Brogden, Jackson and Triplett said the Catholic identity of CYO must be primary, even while players of other faiths are welcomed.

“There are other places kids can play soccer,” Triplett said. “It’s got to be something special to make it worthwhile. It’s part of developing a child.”

Jackson said coaches get to know players personally and care for their well-being. Brogden said that training coaches is important, as it is not just about honing a player’s skills, but working with them as people.

“If you’re presenting yourself as a good Christian, the children see that,” Jackson said.

Finding the soul in sports

Triplett believes elite teams are not always the answer to long-term success.

“Most of our teams are not club level,” Triplett said. “They wouldn’t compete well with what you consider a club-level organization. That’s not what we’re all about. The kids who are participating (however), they’re just as easily training and going on to play high school soccer as any of these other programs.”

Jackson and Triplett said time demands on AAU and club team players can be taxing.

“We’re not trying to make ourselves compete with the club teams and be the same cutthroat situation,” Triplett said.

Jackson said that those who play club and CYO simultaneously are reminded of their commitments if there’s a conflict.

“You can’t (miss) games for your own school or your parish because that’s letting them down,” Jackson said.

Triplett said the CYO’s core values are important in the 21st century.

“I love giving the opportunity not only to my kids, but everybody else’s kids,” Triplett said. “I just want to make sure this program stays in place. There has to be somebody who comes along behind you and picks up the ball that’ll keep the program in place. It’s been there for over 60 years. Hopefully, it’ll be there another 60 years.”