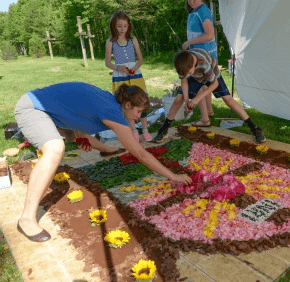 By Cameron Rogers
Special to the Review
SEVERNA PARK – Flower carpets and chalk panels decorated the sidewalks and paths along St. John the Evangelist Parish for the feast of the Body and Blood of Christ May 28.

Coming a week after Trinity Sunday, Corpus Christi emphasizes the significance of Jesus’s presence in the sacrament of holy Communion.

“In a world where a lot of people doubt the real presence of Christ, what greater thing can we do as a parish than to draw attention to the real presence and to have a procession with beautiful artwork?” said Father James Boric, associate pastor of St. John. “It’s the core of our faith.”

St. John clergy, staff and organizers encouraged parishioner participation through several art projects which accentuated the procession. Children created ornate chalk panels on the church sidewalks, while a variety of people assembled images made of, among other ingredients, thousands of flower petals.

The two flower carpets, titled “Doors of Mercy” and “Mercy Magnified,” were designed by Naomi Popp, a 23-year-old artist and parishioner of nearby St. Andrew by the Bay in Annapolis. She worked with organizers to plan the procession and spent several hours directing the assembly of the flower carpets prior to the Mass itself.

Popp, a 2014 graduate of Benedictine College in Atchison, Kan., also teaches art to local home-schoolers and the Anne Arundel County Detention Center in Glen Burnie. She praised the artwork and dedication of the children who participated in the Corpus Christi Mass.

“They’ve pushed something forth that they have done themselves,” Popp said. “They get to own their faith, not their parents who are saying, ‘Come do this.’ They do the designs themselves.”

In his homily, Father James D. Proffitt, pastor of St. John, spoke of the importance of evangelization and recognizing Jesus’s presence both inside and outside the church.

“So often, we imprison Jesus behind the walls of our church, or behind the doors of our tabernacle,” he said. “Tonight, at the end of Mass, we’re symbolically going to do what we literally should do every week: we’re going to take him outside.”

He also spoke of the three states of mind needed for the Mass – preparation, participation and application.

The procession led Mass attendees to altars set up in the front of St. John the Evangelist School and the Stations of the Cross. Knights of Columbus Holy Trinity Council #3413 accompanied the priests and altar servers, carrying a canopy for the Eucharist.

After the procession, there was a reception with light refreshments in the church’s narthex.

It was the second annual Corpus Christi procession at St. John. Weather conditions throughout the celebration were better than in 2015.

“Last year it was windier, and there were clouds,” said Larry Kirby, one of the organizers. “We were worried it was going to rain. Luckily, the sun came out in the nick of time.”

The artwork and procession were received very positively.

“It was absolutely beautiful,” said Anne Walsh, a St. John parishioner, “especially with the choirs together and the procession.”

John Heil, another St. John parishioner, said that the Mass was his first Corpus Christi celebration. He praised the artwork, singing and spiritual atmosphere he found.

Corpus Christi serves as a reminder of Jesus’s presence in the Eucharist at a time when, according to a 2010 Pew Research poll, more than four-in-ten Catholics do not know that their church teaches that the bread and wine do not merely symbolize, but actually become, the body and blood of Christ.

The feast day is a predominantly Catholic celebration, one that includes veneration of the Eucharist.
Father Proffitt said that he hoped people would show the same reverence for the Eucharist every week that they show during Corpus Christi.

“It is out of love that Jesus offers himself for us,” he said. “It should literally bring us to our knees knowing who we just received.”

Cameron Rogers, a rising senior at Hood College in Frederick, is a summer intern for the Catholic Review.

The Feast of the Visitation through Elizabeth’s eyes