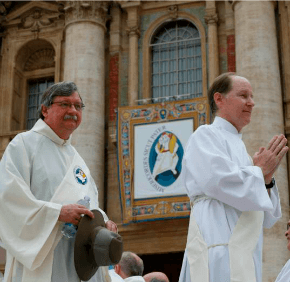 VATICAN CITY – Deacons are called to be servants who set aside their own self-serving plans and are generous with their lives, Pope Francis said.

A servant “is not a slave to his own agenda,” but rather always is prepared for the unexpected and responds, even if that means ignoring the parish schedule, the pope said May 29 at a Mass for the Jubilee of Deacons in St. Peter’s Square.

“It pains my heart when I see a schedule in the parishes – ‘from this time to that time’ – and then, the door is closed. There is no priest, no deacon, no layperson to welcome the people. This is wrong. Have the courage to ignore the schedule,” he said.

Thousands of deacons and their families, braving the increasingly hot and humid Rome weather, attended the final Mass of the three-day Year of Mercy celebration dedicated to the diaconal ministry.

In his homily, the pope reminded them that in order to proclaim Christ, one must first imitate him and “strive to become a servant.”

“If evangelizing is the mission entrusted at baptism to each Christian, serving is the way that mission is carried out. It is the only way to be a disciple of Jesus,” the pope said.

The first step in becoming “good and faithful servants,” he continued, is to be available to others and detached from living life in one’s own way. A true servant doesn’t “hoard his free time,” but gives up “the idea of being the master of his day.”

“One who serves is not a slave to his own agenda but ever ready to deal with the unexpected, ever available to his brothers and sisters and ever open to God’s constant surprises,” he said.

Reflecting on the Sunday Gospel reading, in which a centurion humbly asks Jesus to heal his servant, the pope noted the soldier’s meekness. Despite his authority to insist or force Jesus to come to his house, “he was modest and unassuming, he did not raise his voice or make a fuss.”

“Meekness is one of the virtues of a deacon. When a servant is meek, he is a servant and doesn’t try to mimic the priests. No, he is meek,” the pope said.

Pope Francis said that like the servant healed by Christ, deacons must have “a healthy heart” that has been healed by God through forgiveness and constant dialogue with Jesus through daily prayer and the sacraments.

“You can offer the Lord your work, your little inconveniences, your weariness and your hopes in an authentic prayer that brings your life to the Lord and the Lord to your life. When you serve at the table of the Eucharist, there you will find the presence of Jesus, who gives himself to you so that you can give yourselves to others,” he said.

Cincinnati parishioners learn to ‘Civilize It’ during election season