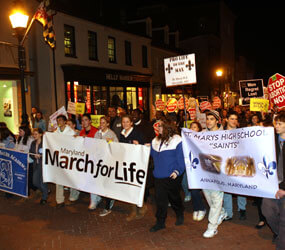 ANNAPOLIS – Shouts of “unite for life!” echoed through the streets of downtown Annapolis March 8 as hundreds of people walked from St. Mary to the State House during the 31st annual Maryland March for Life.

Coming from every corner of the state, the participants called on lawmakers to enact laws to restrict abortion, support women in crisis pregnancies and defund embryonic stem cell research.

One of the most recent of those laws was signed by former Mayor Sheila Dixon of Baltimore before she stepped down from office. The measure requires prolife pregnancy centers to post signs indicating that they do not provide abortions or distribute contraception. It does not require abortion clinics to post similar signs naming what services they do not provide.

“What do we owe the citizens of this country who are looking to protect human life?” Archbishop O’Brien asked.

Too often society answers with harassment, no protection of conscience and laws that take away the voice of the unborn and their supporters, Archbishop O’Brien said.

Despite the negative pressures, Archbishop O’Brien urged pro-life supporters to have hope.

“We must believe that we are prophetic people as we seek to do what God would have us do,” he said, “to let it be known by actions, by our words and by our balloting that human life is sacred and nothing – nothing and no one – will finally be able to stifle that witness that is ours.”

During a rally on Lawyer’s Mall, Ellen Sauerbrey, a two-time gubernatorial candidate, asked attendees to funnel their passion into electing pro-life lawmakers. Unless they do, she warned, there will be no change in the status quo. Abortion clinics will continue to be unregulated, children will have access to abortion without parental consent and embryonic stem cell research will continue destroying human life at its earliest stages.

“This is a really important year because we only get this chance in Maryland every four years,” Sauerbrey said. “If you’re not just as committed and just as dedicated to help elect pro-life legislators and a pro-life governor, you will be back next year making the same arguments to the same people who will turn away as they have for as long as you and I can remember.”

Cathy McLeod, a vice president of Maryland Right to Life, cited abortion statistics that elicited boos from the crowd. Last year, the state spent $2.2 million on abortion, she said.

“Three thousand beating hearts stopped on our dime,” she said.

Meghan Ross, a 15-year-old sophomore at Mount de Sales Academy and a parishioner of Our Lady of Perpetual Help in Ellicott City, attended the Maryland March for Life for the first time.

“We’re here to save the littlest children,” she said. “They are so important to our society. Lawmakers need to see we’re here.”