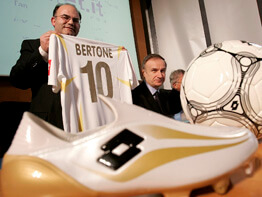 ROME – Students at Pontifical North American College are among those competing in the first Clericus Cup, a soccer championship exclusively for priests and seminarians in Rome.

The championship game will be in June.

North American College had an informal team that occasionally played teams from other seminaries, said Jaime Gil, player and coach.

When the invitation came to enter a team in the Clericus Cup, the response from players at the college was enthusiastic, Gil said.

“I was surprised because we’re all busy with our studies, and it’s hard to find time to play sometimes,” Gil said.

Gil, who was born and grew up in Mexico, said he started playing soccer at age 6. He considered a professional career in soccer and during his high school years was called to join the Michoacan state team.

Gil said he realized that as much as he loved soccer his true vocation was to the priesthood. He turned down the invitation to join the state team, finished high school and moved to Boise, Idaho, to start his formation as a priest.

“This (the Clericus Cup series) is a way for me to do both,” he said, referring to his love of soccer and his vocation to the priesthood.

The Catholic Italian Sports Center, which organized the series, described the team from Pontifical Urbanian University as physically strong.

However, Gil said he was not worried by the description.

“Skillswise we’re still learning, but we have the advantage that all our players have experience playing team sports. We know how to play as a team,” said Gil.

Referees also will have another penalty option. In addition to the yellow warning card and red expulsion card, they can hand out a blue card, which requires an overly aggressive player to leave the field for five minutes.