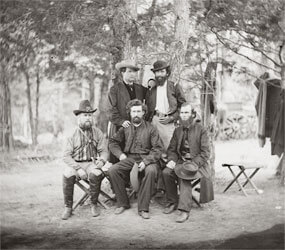 ALBANY, N.Y. – In 1863, a joint committee of Congress held a hearing to assay how the Civil War was proceeding after two years of combat. A number of experts were summoned to testify, including General Benjamin F. Butler.

During his appearance, a lawmaker posed an unusual question: “What has been your experience in regard to chaplains?”

The military man replied, “The chaplains, as a rule, in the forces I commanded, were not worth their pay by any manner of means. … (But) I am bound to say that I have never seen a Roman Catholic chaplain that did not do his duty, because he was responsible to another power than that of the military. … They have always been faithful, so far as my experience goes. They are able men, appointed by the bishop, and are responsible to the bishop for the proper discharge of their duties.”

The Catholic chaplains he lauded served the armies of both the North and South during the conflict, also known as the War Between the States. Many of the priests were born in Ireland or were of Irish descent, as were the soldiers to whom they ministered.

A newspaper article in 1862 reckoned that there were only 22 priests out of 472 military chaplains. Nevertheless, their duties were fulfilled down to the most minute detail. An example was recorded in an 1864 issue of The New York Times, which shared letters exchanged between a chaplain and a general.

The former mailed $16 to the officer and informed him that it was “restitution for injury done to the U.S. government. … By no possible supposition can you ever know the name of the party making the restitution, nor can you ever know the circumstances of the case. The knowledge of the fact was obtained through the Catholic confessional, the secret of which is inviolable. The sum, though small, compensates the government, to the last fraction, for the injury done.”

The major general replied that the money was “just restitution, … the acknowledgment of the fault having been made in the confessional.”

Contrast that small detail by one chaplain with the large effort exerted by Father Peter McGrane, chaplain at the U.S. Army Hospital in Philadelphia. He joined 25 Sisters of Charity who were assigned by the military to care for injured and dying soldiers between 1862 and the end of the war three years later.

One of the nuns kept a diary of the experience, noting that “on the 16th of August (1862) over fifteen hundred sick and wounded soldiers were brought to the hospital, most of them from the (second) battle of Bull Run. Many had died on the way [to the hospital] from exhaustion, others were in a dying state, so that the chaplain, Father McGrane, was sent to administer the sacraments.”

The priest continued to minister in the hospital, baptizing converts, celebrating Mass, hearing confessions and anointing the dying. While he was stationary, most chaplains performed their ministry in mobile camps and on shifting battlefields for Union and Confederate forces. Among the latter, one of the most famous was Father John Bannon.

A tribute to him, written at the end of the 19th century, said that Father Bannon “left a comfortable living and prosperous parish in this city (St. Louis) for the privations and discomforts of an army life. … His influence … was felt by all who associated with him, and his presence wherever he went repressed the rude manners of the camp.

“Not that he objected to gaiety and mirthful pleasure, for he had the most affable manners and genial nature, but he always frowned upon the soldiers’ unrestrained expressions and rude jests. … He became noted for his bravery in the field in attending the wounded and dying in very exposed places. He was both a pious and a practical man, and became a ministering angel wherever broken and bruised humanity needed help and consolation.”

Father Bannon became so renowned that Confederate President Jefferson Davis dispatched him to Ireland to appeal for support for the South. The priest remained there until his death in 1913.

On the other side of the front lines, Holy Cross Father William Corby, who would later become president of the University of Notre Dame, served Northern troops during the Battle of Gettysburg, Pa. He did so with such distinction that a statue of him now stands on that battleground.

The sculpture portrays him with his hand raised in blessing. A plaque informs visitors that the monument shows “Father Corby, a chaplain of the Irish brigade, giving general absolution and blessing before battle at Gettysburg, July 2, 1863.”

The priest really did don a stole, climb atop a rock and address hundreds of soldiers, offering them absolution if they were genuinely penitent and reminding them of the justice of their cause. The scene was witnessed by an officer who later wrote that “every man fell on his knees, his head bowed down. … The scene was more than impressive; it was awe-inspiring. … I do not think there was a man in the brigade who did not offer up a heartfelt prayer. For some, it was their last.”

In his memoirs, Father Corby, who vowed to stay “within gunshot” of his men, likened his fidelity to the Irish brigade to a marriage. Being a chaplain, he said, was “much like getting married … for better, for worse, for richer, for poorer, till death do us part.”