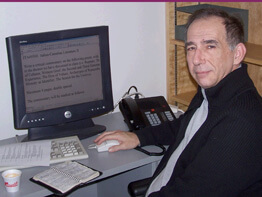 TORONTO – The second person ever to serve as poet laureate for Toronto is also the first Catholic priest to hold the title.

It’s an opportune pulpit for Father Pier Giorgio Di Cicco, 57, a priest-poet-philosopher who is now spreading ideas about how individuals, government officials and even business leaders can make cities and communities more livable as they give more thought to the “poetry” of their lives.

“I have not been strictly interested in poetry as poet laureate,” Father Di Cicco told Catholic News Service. “I have been interested in restoring the notion of creativity in the greedy landscape of globalization. The poet is a mediator of faith; the poetic touch is also about saving souls.”

Ordained as a priest of the Toronto Archdiocese in 1993, Father Di Cicco was appointed poet laureate in 2004, winning over more than 40 other local writers and poets.

The position was created by Toronto city officials in 2001 to spur greater appreciation for the arts and culture. Father Di Cicco however, has already expanded the office with his determination to review the meaning, purpose and potential of wider civic engagement.

Toronto’s poet laureate was born in Arezzo, Italy, in 1949, and moved with his family to Montreal at age 3. His family later moved to Baltimore, where the future poet-priest spent his formative years and formed his first impressions of how streets, buildings, neighborhoods and big-city life affect the body and soul.

Returning to Canada in 1968, Father Di Cicco enrolled at the University of Toronto, where he obtained degrees in English literature and education.

After enjoying success in the commercially tenuous world of poetry, in 1984 Father Di Cicco took a lengthy hiatus from literary pursuits to enter an Augustinian monastery north of Toronto. The experience as an Augustinian brother strengthened his sense of service, contemplation and ministry and led to his ordination as a diocesan priest nine years later.

“Homilies, for example, are poems,” he said. “We must think outside the box, and (remember) that poetry is not that which is not prose. That which persuades the mind and heart is poetic. Christ’s parables are testimony to his understanding that people wouldn’t have read poetry even if they had had printing presses. The ‘truth’ seduces such that his words seduced. Poetry today, even in text, cannot seduce, if it does not allude to the truth.”

Father Di Cicco contributes poems to The Catholic Register newspaper and to the Sunday edition of the Toronto Star. His most recent collection, “Dead Men of the Fifties,” was released in 2004.

“… like much of myself, oh grace, and though I thank
the world there is no snow, may it fall like
all these messages from His heart
to shelter us, to rest, to understand the stillness
before death, in love.”

In line with his views on the importance of art and poetry in the creation of healthier, more sustainable communities, Father Di Cicco has utilized the poet laureate platform to expound his notion of the “urban aesthetic.” In lectures and appearances in Toronto and other North American cities, he has outlined this aesthetic as an effort to extend the truth and beauty of art beyond galleries and museums and as a way to color individual and community interaction.

“My work has not been typical to the task of a poet laureate, but useful to the creative cities agenda,” he said in a recent address.

“When I came on board as laureate, I was expected to be advocate of the arts. But it was clear to me from the start that the arts would be forever handicapped until they were companioned by the notion of civic aesthetic,” he said. “All sectors must be creative, and all citizens aware of their imaginative capacity. Governance must know that creativity opens the door to civic trust, and that civic trust is the foundation of good city building. Trust enables co-habitation, racial concord, mercantile prosperity, safer streets, exciting boulevards and, ultimately, sustainability.”

But in an age of multiculturalism, diversity and the hesitancy to discuss an active faith in the public domain, does a Catholic priest as poet laureate feel any special restraints? Father Di Cicco apparently sees no such dilemma.

“Because I’m a poet, I can translate Catholic truths in persuasive aesthetics and accessible rhetoric,” he said. “I’ve always found it a challenge to express the spiritual in a secular world, but then poetry does that.”

Although his three-year term as Toronto’s poet laureate will come to an end this fall, Father Di Cicco is not about to rest on his poetic or other laurels. In addition to teaching a course on Italian-Canadian literature at St. Michael’s College of the University of Toronto, Father Di Cicco also plans to lead a course on “ethnometaphysics or citizenship in a global landscape.”

And as far as a poet’s future security goes, Father Di Cicco has other irons in the fire.

“I don’t make a living entirely from poetry – nobody does,” he said. “I make a living from my reputation as a poet and civic figure. Poetry doesn’t matter to most people, but most people don’t see the poetry in their lives, so the challenge … is to awaken them to the creativity they enact without knowing it. In so doing, they might take to reading and buying poetry.”