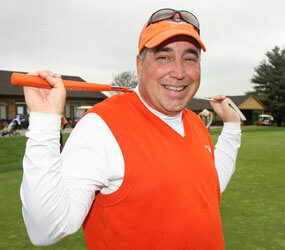 Surrounded by some young men who were less than half his age, Father Samuel V. Young admitted to nerves as he stood on the putting green of Winters Run Golf Club in Bel Air.

“We’ll know within the first few holes whether I’ll play well or not,” said the 47-year-old pastor of St. Joan of Arc, Aberdeen. “If you start making bogeys, you’ve got to catch back up. You’re automatically behind.”

Hours later, he finished the one-day tournament with a score of 81, tied for 36th, and missed the cut for a statewide event by just two strokes. Remnants of days of torrential rain slowed down many promising golfers in the tournament.

“I thought I had a shot,” Father Young would say a day later about making the cut. “It was so wet out there. I had a good time”

Despite cloudy skies, Father Young was a colorful presence on the course in his vibrant orange hat and matching shoes. Known by some on Harford County greens as “Padre” (the Spanish word for “father”), the priest has been a part of the golf scene for some 30 years.

Father Young has met many friends on the golf course over the years, including 29-year-old Doug Gentilcore.

Father Young married Gentilcore and his wife at St. Leo in Little Italy.

“He’s been great to us, everything a priest should be,” said Gentilcore, who also played in the tournament.

Father Young, who has under a 4.5 handicap, has played in various amateur tournaments over the years, and has seen an influx of young talent with a penchant for long drives.

“It’s really getting more challenging as I’m getting older,” Father Young said. “They really tend to hit it far.”

The power game might not be Father Young’s strong suit, but that’s not what he’s going for when he hits the course. He prides himself on accuracy.

Gentilcore said the priest is underselling his strengths.

“He’s got a great short game,” Gentilcore said. “He’s really improved with his ball-striking over the last year. He makes a lot of putts. He’s out there to get better, but he’s also out there to win.”

It is a passion outside parish life for Father Young and allows him to talk about his calling with others should they ask.

“There’s so much connection that goes on out there,” said Father Young of being paired with strangers. “You find out someone grew up in your neighborhood. It just gives a person another view that we’re not all just about sacramental life. I can be competitive too. I love what I do. Golf is just a wonderful outlet.”