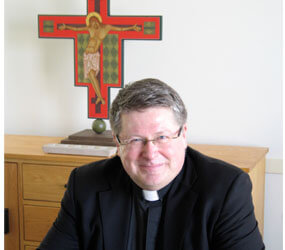 ST. PAUL, Minn. – One of the duties of a priest is to minister to the sick and suffering. But when Guillain-Barre syndrome paralyzed Father Jan Michael Joncas and brought him close to death in 2003, the well-known liturgical music composer suddenly found himself on the receiving end of a ministry he knew well.

Father Joncas, an associate professor at the University of St. Thomas in St. Paul and composer of the well-known hymn “On Eagle’s Wings,” spent months in the hospital recovering the use of his arms and legs.

During that time, he said he gained insight into suffering and dependence on God and others.

“I learned that you don’t solve the problem of suffering,” Father Joncas said. “You enter into the mystery of suffering. And it does change you, and it changes your world.”

Father Joncas said he still lives with nerve pain in his hands and feet. He can no longer play the guitar, and when he’s tired he sometimes stumbles. He also occasionally experiences unpredictable waves of fatigue. But, he said, he is 95 percent back to normal and busier than ever.

Since his recovery, Father Joncas told The Catholic Spirit, newspaper of the Archdiocese of St. Paul and Minneapolis, he has had an “explosion” of musical creativity.

In the past two years, he has recorded three collections of liturgical music. Currently, he is writing settings of every responsorial psalm for the three-year Sunday Mass cycle and a hymn text for every Sunday and solemnity, in addition to other projects he has been commissioned to do. He has found that his newer works mostly revolve around themes of rescue, hope and thanksgiving. “That’s the stuff that’s coming out of the suffering,” he said.

Asked what he learned from his suffering, Father Joncas replied: “I didn’t know (my faith) would be as strong as it was. Because I live as a university professor and a theologian, an intellectual, I spend a lot of my time pondering God under lots and lots of headings and using all the tools of reason I can think of to deal with it, and this changed all that. I mean, I still do all that, but now I can talk about an experience of a God of rescue, which is very different.”

Father Joncas said the experience also rounded out some of the sharper aspects of his personality. “Once you look death in the face, a lot of stuff just doesn’t matter that much,” he realized.

He finds himself more attentive to people, he said. “I’m much less concerned about my agenda and much less worrying about whether I get feedback from them, and much more able to just kind of enter into their world and be with them, even if it just means being present and silent.”

Father Joncas said family, friends and chaplains all helped him get through a difficult time in his life. Particularly memorable was when a priest friend celebrated the sacrament of anointing of the sick with him, which Father Joncas described as “shatteringly beautiful.”

“I’d done that for years,” he said. “But then to hear those prayers being applied to me was a whole new world.”

Another experience that touched him deeply was the first time he was wheeled on a gurney to attend Mass at the hospital chapel surrounded by other patients on gurneys, in wheelchairs and using walkers.

Although feeding tubes prevented him from receiving Communion that day, he said, “It was just so wonderful to finally be back praying in community – but unlike a lot of parish communities, realizing how broken most of us were.”

Today, Father Joncas celebrates life and health with new eyes, he said. He continues to ponder what God was trying to teach him through his suffering.

“I am a middle-aged, Caucasian male in this culture, and that means that we highly prize independence, autonomy, being in charge, being in control. And I had none of that. I had to completely rely on other people to do even the most basic things for me,” he said.

“What I say now is I wouldn’t wish this on anybody. But I also think for me it was a great blessing,” Father Joncas said. He believes it was God’s way of telling him, “You aren’t in charge, you aren’t in control. Let go.”