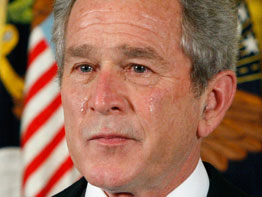 WASHINGTON – A tearful U.S. President George W. Bush presented the parents of Petty Officer 2nd Class Michael Monsoor with a posthumous Medal of Honor for saving the lives of two Navy SEAL teammates by sacrificing his own in Ramadi, Iraq.

At the April 8 ceremony at the White House, President Bush said this highest military medal was “awarded for an act of such courage that no one could rightly be expected to undertake it. Yet those who knew Michael were not surprised when he did.”

Father Paul Halladay, former chaplain of the 1st Battalion, 506th Infantry Regiment, was at the ceremony and knew Petty Officer Monsoor when he was a chaplain stationed in Ramadi.

He was not unlike others his age, Father Halladay told Catholic News Service April 7, noting that like the saying “still waters run deep” Petty Officer Monsoor “was a man with a depth of courage and spirituality.”

Father Halladay, a priest of the Archdiocese of Mobile, Ala., currently stationed with the 58th Transportation Battalion at Fort Leonard Wood, Mo., told CNS he knew Petty Officer Monsoor “was well loved by his team” and said he had a “quick smile.”

“I do know that (his faith) was important to him, while that didn’t keep him from being a normal 25-year-old man,” he said. But his faith “just made him the best 25-year-old man he could be,” added the priest.

Father Halladay said Petty Officer Monsoor’s faith life allowed him to instinctively save the lives of his teammates.

“So when it came down to laying down his life for his friends, his faith life allowed him to be able to do that without a moment’s hesitation,” he said.

At the White House ceremony, President Bush said that Petty Officer Monsoor, who was from Garden Grove, Calif., “showed the strength of his own convictions” as a youth. The president told a lighter story of the young, resolute Petty Officer Monsoor who refused to put on nice clothes for school, instead wearing plaid with stripes.

“And years later, there would be no stopping an even more determined young man from donning a uniform of Navy blue,” President Bush told the solemn audience, including Petty Officer Monsoor’s siblings, Navy SEALS, Vice President Dick Cheney, Secretary of Defense Robert Gates, Sen. John McCain, R-Ariz., and others.

The president added that Petty Officer Monsoor, who had asthma as a child, strengthened himself into an athlete who excelled in sports such as football and snowboarding.

“His teammates liked to laugh about the way his shiny Corvette would leave everybody in the dust. But deep down, they always knew Mike would never leave anybody behind when it counted,” said President Bush.

President Bush explained that Petty Officer Monsoor had a chance to escape the grenade, but decided to save his two friends.

“For Mike, this was no choice at all. He threw himself onto the grenade and absorbed the blast with his body,” said President Bush, who quoted one of the survivors as saying: “Mikey looked death in the face that day and said, ‘You cannot take my brothers. I will go in their stead.’“

President Bush’s lips quivered and a tear streamed down his face as he called Petty Officer Monsoor’s parents forward and stood by them as they received the medal.

Petty Officer Monsoor received the Silver Star Medal posthumously for his heroic actions in May 2006 when he pulled a wounded teammate to safety while under enemy fire. He also was honored with the Bronze Star Medal, the Purple Heart and the Combat Action Ribbon.