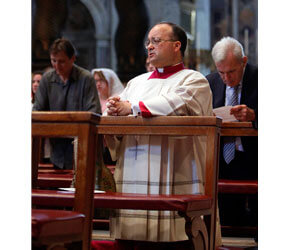 VATICAN CITY – Praying with a group of students preparing for ministry in the church, the Vatican’s chief prosecutor of clerical sex abuse cases said there is a special place in hell for priests who abuse children.

Monsignor Charles Scicluna, an official at the Congregation for the Doctrine of the Faith, offered a long meditation May 29 during a prayer service organized by the students to pray for Pope Benedict XVI, for the victims of clerical sex abuse and for the conversion of the abusers.

Mary M. Nolan, a 25-year-old philosophy student at the Pontifical University of St. Thomas in Rome, said the scandal “makes me grieve, which is natural. But I have hope that God has a plan and he needs us to open ourselves to him in prayer. That’s what this is about.”

Nolan, who is from South Bend, Ind., and several other lay students and seminarians from the United States, England and Ireland organized the service on their own. The fact that Cardinal Angelo Comastri, archpriest of St. Peter’s Basilica, and Monsignor Scicluna signed on to be part of the service “was just chance,” she said.

“For us, it was important that this be a grass-roots thing,” she said.

More than 200 people – including dozens of seminarians, a few Vatican officials and staff members of the English, Irish and U.S. seminaries in Rome – gathered at the Altar of the Chair in St. Peter’s Basilica for one hour of silent eucharistic adoration and for the prayer service.

The intercessions, written by the students, asked God’s blessings for the pope and for the victims of abuse at the hands of men or women of the church.

They also prayed for “clergy and religious who have abused children,” that they would face the truth of what they did, recognize its impact on the victims and the church and accept the need for justice to be done.

Monsignor Scicluna said participants had gathered to “echo the love, the care and the concern that the church – the bride of Christ – always has had for children and for the weak.”

Reflecting on Jesus’ comments about welcoming children and about having a child-like faith, he said the child is the “icon of the disciple who wants to be ‘great’ in the kingdom of heaven.”

“How arid the earth and how sad the world become when this beautiful image, this holy icon is trampled, shattered, sullied, abused, destroyed,” he said.

Quoting St. Gregory the Great, he said that a priest, who “either by word or example, destroys others,” would face a particular torment in hell.

“But the Lord, who does not desire the loss of his servants and does not want the eternal death of his creatures, immediately gives the remedy for the condemnation, the medicine for the illness, the relief for the danger of eternal damnation,” he said.

“His are the strong words of the divine surgeon who cuts to heal, amputates to restore health, prunes so that the vine would bear much fruit,” Monsignor Scicluna said.

The Vatican official also denounced the sins that have been caused by “the arrogance, the insatiable ambition, the abuse of power and the injustice of those who would profit from ministry to make a career.”

To combat abuse in the church, he said, all Catholics must devote themselves to “Jesus in the Eucharist, fire of love,” and allow themselves to be purified and transformed by the Holy Spirit.