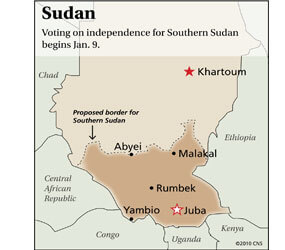 JUBA, Southern Sudan – Every Saturday, Natalina Mabo walks through the streets of Wau on her way to another house of worship. With her are several hundred people following a candle lantern – they call it a “peace torch” – that symbolizes their longing for an end to the violence that has racked the south of Sudan for decades.

The lantern and the march are part of a 101-day campaign for a peaceful referendum in Southern Sudan, an international ecumenical effort to encourage a peaceful environment for January’s independence vote.

Mabo is coordinator of the justice and peace commission for the Catholic Diocese of Wau. Although the prayer campaign was initiated by Catholics, others in this war-torn country quickly appropriated the idea. In Wau, the peace torch has visited Pentecostal, Episcopal, Coptic and Africa Inland churches, and at the beginning of December, it spent two weeks in the city’s mosque. On Dec. 11, it passed to St Mary’s Cathedral.

Mabo told Catholic News Service the campaign is having an effect in a country where often the only thing people can agree on is their rejection of northern control. In the past, tribal tensions and disputes over land and cattle have threatened to derail any progress toward nation-building. Yet in October, President Salva Kiir got all political parties to set aside their feuding until after the referendum, and he promulgated an amnesty that brought several disgruntled military leaders back into the fold.

“There is something good going on. It’s not like before. Now you can see Southerners united, even the political parties. We’ve changed our mind. There is a sense of unity among Southerners now that we never saw before. Because of the 101-day campaign, people all around the world are praying for Sudan. And things are changing as a result,” Mabo told Catholic News Service.

The campaign was the brainchild of Sister Cathy Arata, a School Sister of Notre Dame from New Jersey who coordinates pastoral services for Solidarity with Southern Sudan, an international network of religious congregations supporting the church in this nascent country.

Sister Arata said she was intrigued by the 101 days that stretch from the U.N. International Day of Peace Sept. 21 to World Peace Day Jan. 1. The period coincides this year with preparation for Southern Sudan’s Jan. 9 referendum on secession from the North.

Sister Arata said the campaign uses prayer as a method to provoke change.

“We began to see it as a time to consciously pray for peace, for a peaceful referendum but, more than just saying prayers, our focus is on changing our hearts as a way to change the world. If peace will come it will be because each of us makes a commitment to changes ourselves in order for peace to thrive,” she told CNS.

The idea quickly caught on. Sudan’s Catholic bishops endorsed it, and Catholic Relief Services agreed to provide funding. A committee drafted a common prayer – translated into 16 languages – designed a poster and produced a study guide. People around the world joined the prayer campaign.

Bishop Eduardo Hiiboro Kussala of Tombura-Yambio said the campaign has helped people focus on voting as a contribution to peace.

“We’re telling people they’ve got to vote because their vote is their personal contribution toward a peaceful Sudan. The 101 days of prayer are offering us the privilege of coming together, of thinking about the duties of peace. People are responding very well, including people in other churches,” Bishop Kussala told Catholic News Service.

Sri Lankan Claretian Father Callistus Joseph, who coordinates the Solidarity with Southern Sudan office in Juba, said the most surprising aspect of the prayer campaign is the way it has been embraced by government officials, who have helped distribute posters, reflection books and prayer cards. He also said people are aware that, with their vote, “they’re making this decision on behalf of those who have died for the cause, and they’re making it for future generations.”

In Malakal, a city near the border with northern Sudan, the diocesan justice and peace coordinator, Father Matthew Pagan, said the campaign was launched in September with an ecumenical march joined by government officials.

“We’ve moved ahead of the government in talking with people in the villages about the referendum. And in one case, the government came to us about one area where there was violence during the last elections. People had voted for (some reform candidates) and so the army came around and abused people. People saw this as punishment for how they had voted, and thus were … afraid to register to vote in the referendum,” Father Pagan said.

“I sent a priest there to tell people that the referendum isn’t a political choice, but rather an opportunity for them to have a choice about their own future. As a result, people started registering,” he said.

In Nzara, the campaign’s materials were translated into the Zande language and discussed in several study groups that met weekly. Children took the lead, choreographing dances and writing songs and skits about peace-related themes, said Brazilian Comboni Sister Nadi de Almeida, who coordinated the local campaign.

“The children made guns of wood and then burned them. They took some pigeons, because we don’t have any doves, and released them in a ceremony,” she said.

In Wau, Mabo said a committee has formed in every parish to build “a culture of peace,” especially among youth. She said the local committee coordinating the prayer campaign is likely to continue after the 101 days ends in January.

“We want to continue to plant the seeds of peace in the hearts of the people, creating unity among churches as we help people be peacemakers, especially in whatever emergency situations could develop in the months ahead,” Mabo said.