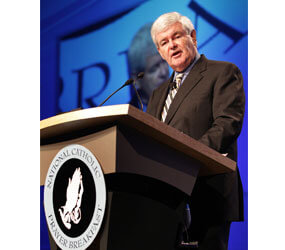 Bishop William E. Lori of Bridgeport, Conn., urged the audience of about 1,500 people, including politicians and Catholics from around the country, to take the message of Pope John Paul’s pontificate to heart and not let it be “a flash of light that fades.”

In order to continue the pope’s insistence on religious liberty, the bishop urged the crowd to remember the plight of persecuted Christians in the Middle East and ask government leaders to speak out for those “persecuted and killed for proclaiming the name of Christ.”

Closer to home, he spoke of a “subtle undermining of religious freedom in the United States,” referring to health care provisions that “call into question the faith” of taxpayers and health care providers opposed to abortions.

Too often, he said, religious freedom is viewed as a “carve-out” or a special grant by the state, instead of being recognized as an inalienable right. He said churches should be guaranteed more than just their right to worship when their role in serving the poor and those in need is so extensive.

When the church is inhibited in “its ability to deliver” services, it is “neither just nor reasonable,” he said.

“We too must proclaim the truth boldly,” he told the crowd who gave him a standing ovation.

Former House Speaker Newt Gingrich also addressed the prayer breakfast, highlighting Pope John Paul’s leadership and role in the downfall of Soviet communism, after a few minutes of a recent documentary he and his wife Callista produced about the pope was shown on a large screen.

The documentary, “Nine Days That Changed the World,” which was released last summer, chronicles the pontiff’s nine-day pilgrimage to Poland in 1979 and examines the significant role of that event.

The former Republican congressman, who is considering a run for the presidency, also spoke of his conversion to Catholicism in 2009 and admitted jokingly to the crowd that he hadn’t attended enough Knights of Columbus pancake breakfasts to properly address them.

He said he is “often asked when I chose to become Catholic,” but said it is “more truthful to say that over the course of several years I gradually became Catholic and then decided one day to accept the faith I had already come to embrace.”

One part of his conversion had to do with Pope Benedict XVI’s 2008 visit to Washington. When Gingrich saw the pope during the Mass at Nationals Park, he said he was “struck by the happiness and peacefulness” of the pope, which he said confirmed his own views about Catholicism. That night, he told a priest that he wanted to become Catholic.

Other speakers at the seventh annual breakfast included Virginia Gov. Robert McDonnell, who spoke of his Catholic upbringing and of the need to follow Pope John Paul’s example of serving others.

Lila Rose, founder and president of the pro-life group Live Action, which currently focuses on investigating Planned Parenthood programs, spoke of her recent conversion to Catholicism as the “best decision” she ever made. She said the pro-life efforts of today’s young people reflect a desire to “build a culture of life” advocated by Pope John Paul.

She noted that during the pope’s last visit to the United States in 1999, he spoke in St. Louis about the urgent need for all to be “unconditionally pro-life.”