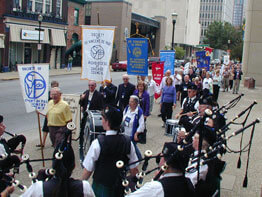 LOUISVILLE, Ky. – For more and more people, the American dream isn’t turning out the way it was envisioned, said Cathy Hinko, executive director of the Metropolitan Housing Coalition in Louisville.

“So many people say of people who are poor, ‘It’s their fault,’” noted Hinko in a presentation to members of the Society of St. Vincent de Paul Sept. 26. “(They say), ‘America is the land of opportunity; there’s the ability to make it in America.’”

“And that is true for some people,” she said. “But there are also systems in place that say that isn’t so.”

For one thing, she said, more people are moving into poverty, and the middle class is no longer rising.

Hinko’s presentation on “The High Cost of Being Poor” was one of more than a dozen small-group sessions and workshops held during the society’s Sept. 23-27 national meeting in Louisville.

A host of statistics and graphs punctuated Hinko’s presentation. And as she quantified poverty in America, some Vincentians nodded in agreement, recognizing in the numbers the people with whom they work.

According to one chart Hinko presented from the Economic Policy Institute, “if you’re born poor, you’re going to live poor, and you’re going to die poor,” she said. “We think there’s more mobility in class than there actually is.”

Health care, gas and utilities are taking a bigger bite out of incomes than ever. To be able to afford basic services, a family of three would need to earn nearly $2,000 a month, Hinko said. And that doesn’t include the cost of housing.

The fair market rate in Louisville for a two-bedroom rental unit is about $663, she said. In all, a family would need an annual income of about $33,000 to afford all the basic necessities – including food, clothing, health care, shelter, utilities, transportation and child care.

For Hinko, families who can’t afford these things are living in poverty. But, she said, her definition of poverty differs from the threshold set by the federal government. The 2008 federal poverty line is $17,600 for a family of three.

In addition to the cost of living, other challenges unique to the poor also come into play, she said. For instance, car and homeowners insurance can cost 40 percent more in high-crime areas.

And for people without bank accounts, there’s a charge to cash a paycheck. Since the poor often don’t have checking accounts, they may pay 3 percent, 5 percent and sometimes 30 percent or more of their income to a check-cashing service, said Hinko.

Education classically has been regarded as the great equalizer. But, Hinko said, there are obstacles there as well.

“Where people live in mass populations of low-income housing, they found young people were having old people’s diseases,” she said. “In places where housing was substandard, there were 10 times more hospitalizations (for childhood asthma).”

Hunger was once a problem in the U.S. Now, she said, it’s obesity. The poor have access only to unhealthy food.

“What can we do to change the system? These systems don’t work,” she said. “When I was growing up, there weren’t any homeless children. I know we can live in a world without homeless children, because I used to live in one.”