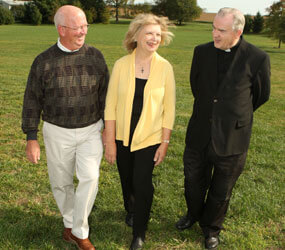 Father Michael J. Ruane, the pastor of St. Michael, Poplar Springs, nodded toward the couple to his left.

“There has always been a real community feel at St. Michael,” Keith Gehle said. “When Father Mike came (in 1988), it really became a home for us. He’s a unique spiritual leader. He’s always says it’s your church. He empowers people to do something with their faith.”

To that end, the Gehles created The Rev. Michael Ruane Endowment Fund for Youth Ministry.

“If we’re blessed, we’ll finance the construction of ballfields (on the parish grounds),” Mary Ann Gehle said, of one possible goal of the fund. “This is a long-term project, and we may not see the benefits. This is about the future of the church.”

The Gehles are among the benefactors featured in promotional materials for the Archdiocese of Baltimore’s Catholic Community Foundation, which is “committed to building a dynamic force of Catholic philanthropy in Maryland.”

They’ve already served as inspiration in their parish, where, after they established a fund in Father Ruane’s name, seven others were created.

The connection between the Gehles and Father Ruane is deep-felt and decades in the making.

Established in 1879, St. Michael, in western Howard County, also draws from Carroll, Frederick and Montgomery counties. It numbered 600 families when Father Ruane became pastor. Now it numbers 1,500, growth that has been witnessed and aided by the Gehles.

Their roots are in rural eastern Nebraska. Keith Gehle is a retired FBI agent. Mount Airy and environs were entering their boom years, transforming from farmland to homes for D.C. commuters, when he and Mary Ann chose southern Carroll County in which to settle and raise their children, Lisa and Brian, now in their 30s.

It was through their children that Father Ruane recruited the Gehles to help strengthen his faith community.

“It goes back to the early 1990s, and Renew,” he said. “I chose Keith and Mary Ann as part of our leadership team. Their children were involved in our youth ministry, and I couldn’t help but notice their (the Gehles’) involvement there.”

Father Ruane, in turn, told them about the vibrant parish life he had experienced as as an associate pastor at St. Agnes, Catonsville, and Our Lady of Hope, Dundalk, which had parish schools and burgeoning Catholic Youth Organization programs.

With anywhere from 500 to 800 involved in religious education at St. Michael, these have become the good old days for Father Ruane.

“Children are coming out of the woodwork,” he said, of a parish which sent 17 high-schoolers to the Baltimore Youth Catholic Conference in Ocean City Nov. 19-21.

Expanding a safe and inviting environment on the facility front for those teens and coming generations is the Gehles’ way to honor and perpetuate Father Ruane’s vision.

“We’re like the grand-parents of the parish,” said Mary Ann Gehle, chairwoman of the parish’s development committee. “We’ve got to get the younger set involved, give them the skills to keep the church going.”

For more information about the Catholic Community Foundation, call 410-625-8497 or visit ccfmd.org.