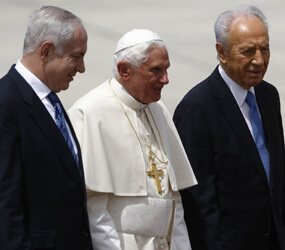 JERUSALEM – Amid billowing Israeli and Vatican flags, Pope Benedict XVI reaffirmed his friendship with both the Israeli and Palestinian peoples, acknowledging the Palestinians’ right to an independent state as well as Israel’s right to exist in “peace and security.”

“Let there be lasting peace based on justice, let there be genuine reconciliation and healing,” the pope said May 15 before boarding his chartered jet at Ben Gurion International Airport in Tel Aviv. “Let the two-state solution become a reality, not remain a dream.

“Let peace spread outward from these lands; let them serve as a ‘light to the nations,’ bringing hope to the many other regions that are affected by conflict,” he said.

Following an eight-day pilgrimage that received a lukewarm reaction in the Israeli media and praise in the Palestinian press, Pope Benedict attempted to assure the Israelis of his friendship.

“No friend of the Israelis and the Palestinians can fail to be saddened by the continuing tension between your two peoples. No friend can fail to weep at the suffering and loss of life that both peoples have endured over the last six decades,” he said.

Israeli President Shimon Peres told the pope his visit was a “profound demonstration of the enduring dialogue” between Jews and Christians around the world. He said the pope’s statements during his visit “carried a substantive weight.”

The visit, Peres added, contributed significantly to new relations between the Vatican and Israel.

“I believe that your great spiritual leadership can influence a spirit of godliness in man. (It) can help people recognize that God is not in the hearts of terrorists. This is a historic mission which resides in your great ability to inspire others,” he said.

“We believe that aside from your pilgrimage, your prayers and the silent sacred moments which were the focal points of your visit, you personally enhanced your visit with an additional spiritual dimension by inspiring peace and elevating hope and understanding – in particular your declaration that the Holocaust, the Shoah, must not be forgotten (or) denied,” the Israeli president said.

The pope, who had been criticized in the Israeli press and by some Jewish leaders following his visit to the Yad Vashem Holocaust memorial May 11 for the language he used to describe Nazi atrocities, recalled his visit to the site as “one of the most solemn” moments in Israel. He called his time with Holocaust survivors “deeply moving encounters” that reminded him of his visit to the Auschwitz concentration camp in Poland three years ago.

“So many Jews – mothers, fathers, husbands, wives, brothers, sisters, friends – were brutally exterminated under a godless regime that propagated an ideology of anti-Semitism and hatred,” Pope Benedict said.

The German-born pope told his Israeli hosts that the saddest sight during his visit was the Israeli-built separation wall at the Aida Refugee Camp in Bethlehem, West Bank.

“As I passed alongside it I prayed for a future in which the peoples of the Holy Land can live together in peace and harmony without the need for such instruments of security and separation, but rather in respecting and trusting one another and renouncing all forms of violence and aggression,” he said.

Peace will not be an easy goal to achieve, the pope told Peres, but he offered his prayers and the prayers of Catholics around the world for all efforts to “build a just and lasting peace in this region.”