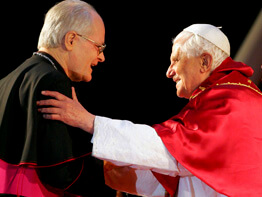 SAO PAULO, Brazil – Pope Benedict XVI encouraged Brazilian bishops to resist attacks on marriage and the family, seek out fallen-away Catholics and defend the rights and dignity of the poor.


In a lengthy speech May 11, the pope laid out guidelines for what he termed a “methodical evangelization aimed at personal and communal fidelity to Christ.”


What is needed in Brazil, he said, is a “leap forward in the quality of people’s Christian lives … so that they can bear witness to their faith in a clear and transparent way.”


Brazil’s 446 bishops constitute the largest episcopate in the world. The papal encounter in the Sao Paulo cathedral came two days before the pope was to inaugurate a Latin American-wide conference to deal with similar pastoral challenges.


The pope rode in a popemobile from his monastic residence to the cathedral, a 20th-century Gothic structure in the heart of the city. Tens of thousands of onlookers lined the streets to catch a glimpse of the pontiff, who was to leave Sao Paulo for Aparecida later in the day.


Looking happy and energetic, the pope greeted the bishops and joined them for vespers. Then he sat on a wooden throne and delivered his speech in Portuguese.


He began by saying the church was experiencing tough times in Brazil, with a worrisome erosion of traditional values.


“The sanctity of marriage and the family are attacked with impunity … crimes against life are justified in the name of individual freedom and rights; attacks are made on the dignity of the human person; the plague of divorce and extramarital unions is increasingly widespread,” he said.


He said there were problems inside the church, including a misunderstanding of the priesthood. People are questioning the value of the priestly commitment to God through celibacy and the priest’s primary service to souls, seeing priestly ministry instead in terms of “ideological, political and even party issues,” he said.


“How can we not be deeply saddened by this?” he said.


But the pope asked the bishops to take heart and muster new pastoral energy, in order to hone their message and draw people back to the church.


Catholics who have abandoned the church – drifting toward religious indifference or attracted by the “aggressive proselytizing of the sects” – are people who were never sufficiently evangelized in the first place, he said.
“They are easily influenced because their faith is weak, confused, easily shaken and naive, despite their innate religiosity,” he said.


The church today needs to go after fallen-away Catholics by sending missionaries, lay or religious, into their homes and engaging them in honest dialogue, he said.


Brazil’s poor, including the many living on the outskirts of big cities, need to feel the church is close to them, “providing for their most urgent needs, defending their rights and working together with them to build a society founded on justice and peace,” he said.


The pope denounced the huge gap between rich and poor in Brazil and said the church needs to address such inequalities, but always from the viewpoint of human dignity, which “transcends the simple interplay of economic factors.”


He said the church should work untiringly to form honest politicians and business leaders, so they can give the economy a “human and compassionate face.”


The pope also strongly underlined the need for vigilance on matters of faith and liturgy.


He said it was essential for church leaders to provide the sacraments of the Eucharist and penance and to be careful that individual confession is the norm.


The pope did not mention the relatively low number of ordained ministers in Brazil, where many Catholics go weeks or months without seeing a priest. Brazil has more than 8,000 Catholics for every priest, one of the highest ratios in the world.


The pope said it was important to promote education in the faith “as it is presented in the Catechism of the Catholic Church” and its accompanying compendium. He said Catholics also need a more correct implementation of liturgical principles to “restore to the liturgy its sacred character.”


He cited the need for good ecumenical relations and said common ground could be found in the defense of fundamental moral values against the “relativistic and consumerist cultural forces that seek to destroy them.”


But he said aggressive proselytism by sects had made ecumenical dialogue more problematic. He said there was a need for deep doctrinal awareness among Catholics, so they could better know the specific identity of Christian communities, the elements that divide them and the possible areas of cooperation.


The pope told the bishops to always remember that priestly celibacy is an important gift for the church. He urged them to closely follow the formation of seminarians, and said the good spiritual direction of future priests is indispensable for “fostering human growth and eliminating the risk of going astray in the area of sexuality.”