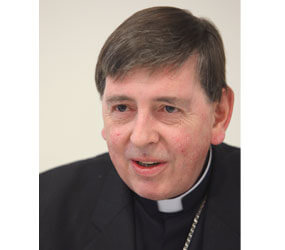 VATICAN CITY – Pope Benedict XVI has chosen Swiss Bishop Kurt Koch of Basel to be the new president of Pontifical Council for Promoting Christian Unity and of the Pontifical Commission for Religious Relations with the Jews.

Bishop Koch, 60, succeeds German Cardinal Walter Kasper, 77, who has been at the council for 11 years – first as secretary, then as president since 2001.

The Vatican announced Bishop Koch’s appointment July 1. It said the pope had also named him an archbishop.

In a letter to Catholics in Basel June 30, Bishop Koch said the pope had asked him in February if he would take the job, stressing that he wanted someone who had both theological knowledge and practical experience in living and working alongside Protestant communities.

Pope Benedict’s words, Bishop Koch said, demonstrate that improved relations with the Orthodox are not the pope’s only concern, but that the pope sees the unity of all Christians as the will of Jesus.

In his farewell letter, the bishop – a past president of the Swiss bishops’ conference and a former professor of dogmatic theology and liturgy – said that when he became bishop, he promised to personally answer every letter Catholics in Basel sent him.

“In recent years, however, so many new areas of work have been added and the time-consuming internal church conflicts and polarizations have grown, so it increasingly became impossible for me to honor my resolution. For that I apologize,” he said.

Born March 15, 1950, in Emmebrucke, he was ordained a priest for the Diocese of Basel in 1982. He studied at Lucerne University and at the University of Munich. After three years’ service in a parish in Bern, he began teaching at Lucerne, eventually becoming rector of the theological faculty in 1995.

Following special traditional procedures, he was elected bishop of Basel by the priests of the cathedral chapter in August 1995 and Pope John Paul II confirmed the election four months later.

As president of the Swiss bishops’ conference, Bishop Koch was called upon to help smooth tensions with Protestants in 2007 when the Vatican Congregation for the Doctrine of the Faith issued a document reaffirming Catholic teaching that the Catholic Church is the one, true church of Christ, even if elements of truth and Christ’s saving grace can be found in separated churches and communities.

Bishop Koch said at the time that he understood how the document could be confusing or even hurtful to Protestants and to Catholics who usually refer to the Protestant communities as churches.

The document, he said, was looking at the term in a “strictly theological” way, explaining that if the Catholic Church believes apostolic succession and valid sacraments, particularly the Eucharist, are essential aspects of the church established by Christ, it cannot recognize as “church” those communities who do not have them.

“Bishop Koch is well known for his openness and deep ecumenical commitment. His book ‘That All May Be One: Ecumenical Perspectives’ is an excellent summary of the present state of ecumenical dialogue and relations,” Rev. Tveit said.

Meeting reporters June 25, Cardinal Kasper said that a challenge he faced repeatedly in his 11 years at the pontifical council was clarifying the church’s position when the wording of certain documents – from the Vatican as well as from Orthodox and Protestant churches – offended the other partner in ecumenical dialogue.

Particularly with the Anglicans and Protestants, he said, since the year 2000 there has been a noticeable loss of “the great enthusiasm” for the possibility of Christian unity that marked the years immediately after the Second Vatican Council.

“Errors, or better, imprudence in formulating the truth have been committed by both sides, including our own,” he said.

Cardinal Kasper said his service at the council involved a lot of hard work, but the experience has left a deep mark on his life and his theological thought.

While he said he’s ready at 77 to retire and get back to theological writing, he also said he will miss daily involvement in ecumenism, “which I always have considered to be the construction site of the church of the future.”

Despite some continuing misunderstandings and new difficulties caused by differences over key moral and ethical issues, the cardinal said he is confident that he is leaving behind “a solid network of human, Christian relationships,” which is essential for finding the truth together.

“Passing the torch” to his successor and to a new generation of ecumenists, Cardinal Kasper said he is confident that ecumenism will continue to move forward because in an increasingly secular, increasingly globalized world, Christians have to work together.

Good personal relationships also existed with leaders of the Jewish community involved in dialogues sponsored by the Pontifical Commission for Religious Relations with the Jews, he said.

“At first, as a German I was afraid to take on this task, given the history of Germany and the Jews, but I must say our partners never mentioned this. I found not only partners, but many friends,” he said.

When difficult moments arose – including Pope Benedict’s rewriting of a Good Friday prayer for the conversion of the Jews and his lifting the excommunication of a traditionalist bishop who denied the extent of the Holocaust – the cardinal said the good personal relationships helped ensure the problems were clarified quickly.

“For us, this dialogue with the Jewish community is fundamental because the church has its roots in the Jewish world. The relationship is essential for the church,” he said.