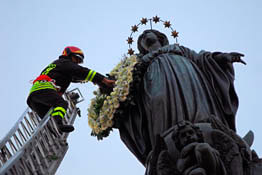 ROME (CNS) — All Christians are called to become “holy and immaculate in love,” just as Mary was, Pope Benedict XVI said.

The pope celebrated the Dec. 8 feast of the Immaculate Conception by reciting the Angelus prayer at the Vatican and by making an afternoon visit to a Marian monument in the center of Rome.

During his afternoon visit, the pope blessed a large basket of pink roses set at the foot of a column topped by a statue of Mary. The statue commemorates Pope Pius IX’s proclamation in 1854 that Mary was conceived free of original sin.

Earlier in the day, Rome city firefighters had hung a wreath of flowers from the statue’s outstretched arm.

In his Angelus address, Pope Benedict said that, while it would be impossible to know why God chose Mary from among all women, the Bible makes it clear that “God was attracted by the humility of Mary.”

“With faith she welcomed Jesus and with love she gave him to the world,” the pope said. “This is also our vocation and our mission, the vocation and mission of the church.”

Arriving in the square near the Spanish Steps in the late afternoon, Pope Benedict was met by huge crowds lining the streets and by Rome city officials.

In his remarks, which took the form of a long prayer to Mary, the pope said that in Mary “the dignity of every human being, which is always precious in the eyes of the Creator,” shines forth.

Mary’s life is the model of discipleship for all those who believe in Christ, he said. All Christians are “called to become, with his grace, holy and immaculate in love.”

The pope prayed that like Mary Christians would learn to say “yes” to the will of God.

“Give us the courage to say ‘no’ to the deceptions of power, money and pleasure, to dishonest earnings, to corruption and hypocrisy, to selfishness and violence; ‘No’ to the evil one, this world’s chief deceiver,” Pope Benedict prayed.

He prayed that Christians would say “‘yes’ to Christ, who destroys the power of evil with the omnipotence of love.”

“We know that only with hearts converted to love, which is God, can we build a better future for all,” the pope said.

Pope Benedict asked Mary to watch over the people of Rome and help them live according to the Gospel.

He asked her to watch over Europe so that its people would know how to draw new life from the continent’s Christian roots.

And he prayed that Mary would demonstrate her motherly love for the whole world “so that, in respecting human dignity and in rejecting all forms of violence and exploitation, a solid basis would be laid for the civilization of love.”

The Vatican said the pope also would stop at the Basilica of St. Mary Major to pray before returning to the Vatican; the archpriest of the basilica is Cardinal Bernard F. Law, former archbishop of Boston.