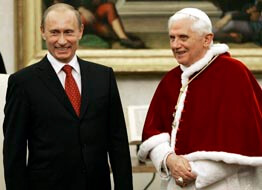 Although two translators were present for the private meeting in Pope Benedict’s library, they told reporters that the pope and Putin spoke to each other in German and required the translators’ assistance only to clarify the meaning of one word.

A Vatican statement said the pope’s meeting with Putin and the meeting held simultaneously by Cardinal Tarcisio Bertone, the Vatican secretary of state, and Sergei Lavrov, the Russian foreign minister, “took place in a very positive atmosphere.”

The two meetings paid particular attention to relations between the Catholic Church and the Russian Orthodox Church, the statement said.

While officials of the Russian Orthodox Church continue to insist relations have not improved enough to permit a meeting between Pope Benedict and Patriarch Alexy II of Moscow, the Vatican’s nuncio in Russia said there are signs of progress, especially in relations between bishops of the two churches.

Archbishop Antonio Mennini, the nuncio, told Vatican Radio March 10 that a Russian Catholic-Orthodox commission has been working to investigate and resolve conflicts and tensions, usually involving Orthodox claims that Catholics have been trying to proselytize Orthodox believers.

The work is going well, the archbishop said, and the members are working in “an optimum climate of friendship and understanding.”

Archbishop Mennini said the Vatican hoped a meeting between the pope and patriarch could be organized soon, “because it would be a very important thing, not just for the Christian world, but also precisely for safeguarding common values” in Europe.

The Vatican statement about the March 13 meetings said the two delegations expressed a desire to further develop their official relations, particularly through cultural exchanges.

A cultural exchange took place during the pope’s meeting with Putin as Pope Benedict presented him with a 1663 lithograph of St. Peter’s Square featuring a third arm of its colonnade. The pope told Putin the third set of columns was never built and an aide explained that the Vatican ran out of money before it could be erected.

Putin gave Pope Benedict an icon of St. Nicholas of Myra, explaining that it was made in 2006 strictly following the traditional Russian method of painting on a gold-covered piece of wood.

Cardinal Bertone presented the Russian delegation with a first-edition copy of the Compendium of the Social Doctrine of the Church in Russian.

In addition to Catholic-Orthodox relations, the Vatican said, the Pope Benedict and Putin also discussed international affairs, particularly regarding tensions in the Middle East as well as “the problems of extremism and intolerance, which are serious threats to civil coexistence among nations.”

The pope and the president, the statement said, emphasized their belief in “the need to preserve peace and promote the negotiated and peaceful resolution of conflicts.”