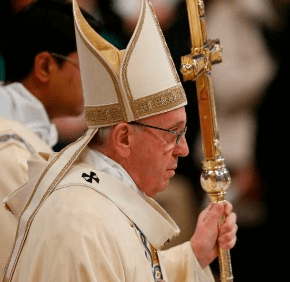 VATICAN CITY – The sexual abuse of children by those who have vowed to serve Christ and the church is a horrendous monstrosity that represents “a diabolical sacrifice” of innocent, defenseless lives, Pope Francis said.
The church, which must protect the weakest, has a duty “to act with extreme severity with priests who betray their mission and with the hierarchy – bishops and cardinals – who protect them,” the pope wrote in the preface to a new book written by a man raped as a child by a Capuchin priest.
The book, “My Father, I Forgive You” (“Mon Pere, Je Vous Pardonne”), was written by Daniel Pittet, 57, in an effort to describe how he fell victim to a predator abuser when he was 8 years old growing up in Fribourg, Switzerland, and the challenges he faced when came forward two decades later with the accusations. The book, currently published only in French, was to be released Feb. 16. News outlets released the text of the pope’s preface Feb. 13.
Pittet – who had been a monk, but later married and had six children – had met the pope at the Vatican during the Year of Consecrated Life in 2015.
In the course of their conversation, Pittet said he told the pope he had been raped as a child by a priest. Tears welled up in the pope’s eyes, and the two embraced, Pittet said in an interview with the Italian daily La Repubblica.
Pope Francis said in his preface that Pittet’s personal testimony about his abuse “is necessary, invaluable and courageous” because often it is very difficult for survivors to talk about what happened and the trauma that lingers for years.
“His suffering moved me. I saw once again the frightful damage caused by sexual abuse and the long and painful journey that awaits the victim,” the pope wrote.
The suffering and suicides of people who were abused by clergy and religious “weigh on my heart, on my conscience and on that of the whole church. To their families, I offer my feelings of love and pain, and humbly ask forgiveness,” Pope Francis wrote.
It is good for people to read Pittet’s testimony and see how “evil can enter the heart of a servant of the church,” the pope said. “How can a priest, at the service of Christ and his church, end up causing so much pain?”
Instead of leading children to God, the pope said, abusive priests “devour them” in “a diabolical sacrifice that destroys both the victim and the life of the church.”
The abuse of children at the hands of religious, Pope Francis said, is “an absolute monstrosity, a horrendous sin, radically contrary to everything Christ teaches us.”
The church must take care of and lovingly protect the weakest and most defenseless, he said, and to act with “extreme severity” toward abusers and toward bishops and cardinals who protect them, “as it has already happened in the past.”
The pope wrote that he was also moved by the fact that Pittet had forgiven his abuser, Capuchin Father Joel Allaz, even meeting with him face-to-face 44 years later.
“The wounded child is today a man standing on his feet, fragile, but standing,” the pope said.
“I thank Daniel because all testimony like his breaks down the wall of silence that hushes up scandals and suffering, sheds light on a terrible area of darkness in the church’s life. They open a path to a just reparation and the grace of reconciliation and also help pedophiles become aware of the terrible consequences of their actions,” he wrote.
According to a press release by the Catholic bishops’ conference of Switzerland, accusations were made against Father Allaz by at least 24 victims.
The first two civil court cases in 1995 and 2002 were thrown out because the statute of limitations had run out. Only when Father Allaz admitted to abusing two minors between 1992 and 1995 was the court able to prosecute and hand down a suspended two-year sentence.
The Capuchins acknowledge that their way of handling accusations against Father Allaz over the years, including transferring him to ministry in France, only allowed for further abuse, according to the press release Feb. 13. The religious order, the conference said, recognizes that by trying to protect the church’s reputation, they worked alone to resolve the problem, did not inform receiving employers and did not take victims’ claims seriously enough.
The conference said the book shows “the sad mechanisms that gave free rein” to manipulative and malicious pedophiles – mechanisms that were built on individual behaviors and mentalities as well as structures.