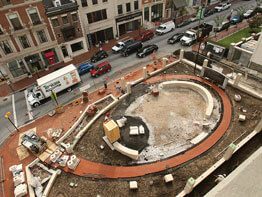 After two years work and a trans-Atlantic crossing from Italy, a long-awaited 7-foot bronze statue of Pope John Paul II now stands near a bustling corner of Charles Street in downtown Baltimore.

Visitors will have to wait until Oct. 23, though, when the statue will be unveiled as the centerpiece of the new $1.3 million Pope John Paul II prayer garden now receiving its finishing touches.

Joseph Sheppard, the Baltimore artist who designed the statue, said the art represents one of the major works of his career. He gets excited every time he drives by the prayer garden and sees the historic figure encased in a wooden crate.

“I’m anxious to see how everything is going to look,” said Mr. Sheppard, whose previous works include a portrait of Pope Benedict XVI.

“I’m hoping people will love it and see what I tried to put into it,” he said. “I tried to show the pope’s character and his charisma and his relationship with children.”

Inspired by a photograph taken when the pope arrived at Baltimore-Washington International Thurgood Marshall Airport for his 1995 papal visit to Charm City, the artwork depicts the pope with two children.

With the exception of murals that will hang on the wall of a parking garage at the back of the garden, all the other elements in the prayer garden are “right on track” for dedication day, according to Mark Potter, executive director of the Baltimore Basilica Historic Trust.

Nolan McCoy, archdiocesan director of facilities and real estate, said the archdiocese is working with city officials to obtain a permit and right of entry agreement to install the murals, which could be put up 90 days after the documents are signed.

Shaped in an ellipse with an entry at the corner of Franklin and Charles streets, the 8,000-square-foot garden includes inscriptions of quotes from Pope John Paul II about religious freedom and Catholicism in Maryland.

The landscaping, designed by Scott Rykiel of Mahan Rykiel Associates of Baltimore, will feature a variety of flowers and evergreens. It will also include symbols of other faiths as a tribute to the late pope’s interfaith outreach.

“It’s meant to be a sacred space in the heart of the city where everyone can gather and take a moment to have some peaceful, quiet prayer time,” Mr. Potter said. “We wanted to celebrate Pope John Paul II as one of our greatest popes and one of the most important figures of the 20th Century,” he said.

Mr. Potter said the garden will complement the Basilica of the National Shrine of the Assumption of the Blessed Virgin Mary, which shares the block with Catholic Charities’ My Sister’s Place. He expects many pilgrims to the basilica will also visit the prayer garden, located on the grounds of the former Rochambeau apartment building.

“It brings a new dimension to Charles Street, and I think the green space will fit in wonderfully,” he said. “Charles Street is known as a scenic byway.”

John Carroll, superintendent of Conewago Enterprises, oversaw construction of the garden project. Dealing with several different elevations made it the most difficult project he’s ever had.

“The detail work was just out of this world – paving work, masonry, benches and all the little things,” said Mr. Carroll. “The stainless steel lettering spelling out Pope John Paul II on the front curb just jumps out.”

Mr. Carroll called it ironic that he shares the same name as Archbishop John Carroll – the man who envisioned the Baltimore basilica as a symbol of religious freedom.

“I feel I was supposed to do this project,” he said with a laugh. “It’s a once-in-a-lifetime project.”

A member of the Church of the Brethren, Mr. Carroll said his heart and soul went into the prayer garden.

“We had some crises, but everything came together the way it was supposed to,” he said.