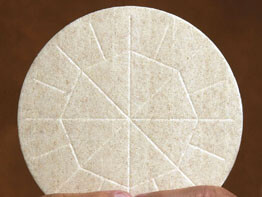 VATICAN CITY – Catholics must believe in the real presence of Jesus in the Eucharist, celebrate the liturgy with devotion and live in a way that demonstrates their faith, Pope Benedict XVI said.

“The celebration and worship of the Eucharist enable us to draw near to God’s love and to persevere in that love,” the pope said in his apostolic exhortation, “Sacramentum Caritatis” (“The Sacrament of Charity”).

The 131-page document, a papal reflection on the discussions and suggestions made during the 2005 world Synod of Bishops on the Eucharist, was released March 13 by the Vatican.

When Jesus instituted the Eucharist at the Last Supper, he did not simply thank God for the ways he had acted throughout history to save people, the pope said. Rather, Jesus revealed that he himself was the sacrifice that would bring salvation to fulfillment.

“The institution of the Eucharist demonstrates how Jesus’ death, for all its violence and absurdity, became in him a supreme act of love and mankind’s definitive deliverance from evil,” Pope Benedict wrote.

Celebrating the Eucharist, he said, “the church is able to celebrate and adore the mystery of Christ” who is present in the bread and wine through the power of the Holy Spirit.

In addition to offering a spiritual reflection on the meaning of the Eucharist, the liturgy and eucharistic adoration, Pope Benedict made several concrete suggestions for further study and for celebrating the Mass in the Latin rite:

– While he encouraged wider knowledge and use of the Mass prayers in Latin and of Gregorian chant, he also repeated the synod’s affirmation of the “beneficial influence” of the liturgical changes made by the Second Vatican Council on the life of the church.

However, he also endorsed the synod’s suggestion that at Masses with a large, international congregation, the liturgy be celebrated in Latin “with the exception of the readings, the homily and the prayer of the faithful.”

– He encouraged bishops’ conferences, in collaboration with the Vatican, to examine their practices for the order and timing of the sacraments of Christian initiation: baptism, confirmation and Eucharist.

The three sacraments are administered together for infants and adults in many of the Eastern churches and for adults joining the Latin rite, while children in the Latin rite usually are baptized as infants, receive first Communion around the age of 7 and are confirmed several years later.

“It needs to be seen which practice better enables the faithful to put the sacrament of the Eucharist at the center, as the goal of the whole process of initiation,” the pope said.

– In expressing his concern for the number of Catholics unable to receive Communion because of irregular marital situations, Pope Benedict confirmed church teaching that those who have been divorced and civilly remarried without having obtained an annulment are not to receive Communion.

However, the pope encouraged bishops to ensure they have fully trained and staffed marriage tribunals to deal with annulment requests “in an expeditious manner.”

– Pope Benedict said the sign of peace at Mass “has great value,” especially in demonstrating the church’s responsibility to pray for peace and unity in a world too often troubled by division, violence and hatred.

While Catholics at Mass should exchange a sign of peace with those near them, he also called for “greater restraint” to ensure the moment does not become one of irreparable distraction.

The pope said, “I have asked the competent curial offices to study the possibility of moving the sign of peace to another place (in the Mass), such as before the presentation of the gifts at the altar. To do so would also serve as a significant reminder of the Lord’s insistence that we be reconciled with others before presenting our gifts to God.”

– The pope also said the church should consider providing new texts for the rite of dismissal at the end of Mass so that Catholics would understand better the connection between what they have just celebrated and the fact that they are sent out in a mission to bring God’s love and truth to the world.

– Pope Benedict said in order to help Catholics “believe, celebrate and live ever more fully the mystery of the Eucharist,” several Vatican offices are preparing a compendium of texts, prayers and explanations of the church teaching on the Eucharist and of the eucharistic prayers used at Mass.

– He called for a general improvement in the quality of homilies and said bishops have a particular responsibility to ensure that the liturgies they celebrate provide an example for the whole diocese of a liturgy celebrated with dignity, beauty and fidelity to the approved rites.

– The pope asked Catholics to pay more attention to how their postures and gestures at Mass communicate their faith in the Eucharist, particularly by “kneeling during the central moments of the eucharistic prayer.”

“Amid the legitimate diversity of signs used in the context of different cultures, everyone should be able to experience and express the awareness that at each celebration we stand before the infinite majesty of God, who comes to us in the lowliness of the sacramental signs.”

– As for church architecture, Pope Benedict encouraged parishes to ensure their facilities are fully accessible to people with disabilities and that the tabernacle containing the Blessed Sacrament is “readily visible to everyone entering the church.”

“In churches which do not have a Blessed Sacrament chapel and where the high altar with its tabernacle is still in place, it is appropriate to continue to use this structure for the reservation and adoration of the Eucharist,” he said.
“In new churches, it is good to position the Blessed Sacrament chapel close to the sanctuary; where this is not possible, it is preferable to locate the tabernacle in the sanctuary, in a sufficiently elevated place,” he said.

However, the pope said, the “final judgment on these matters belongs to the diocesan bishop.”

In the letter, Pope Benedict also formally reaffirmed the obligation of celibacy for priests in the Latin rite and the fact that, in most cases, Catholics and other Christians should not share the Eucharist, which is a sign of full unity in faith.

He reminded Catholics of the obligation to be in a “state of grace,” free from serious sin, before receiving Communion, and of the fact that by receiving Communion they are publicly proclaiming their unity with the teaching of the church.

“Respect for human life, its defense from conception to natural death, the family built upon marriage between a man and a woman, the freedom to educate one’s children and the promotion of the common good in all its forms are not negotiable,” he said.

Politicians and lawmakers must introduce and support laws inspired by those values, the pope said.

Pope Benedict said, “bishops are bound to reaffirm constantly these values as part of their responsibility to the flock entrusted to them.”

But the pope did not mention his position on whether or not bishops should declare publicly that they would withhold Communion from a politician who did not fully accept church teaching.

At the Vatican press conference presenting the document, Italian Cardinal Angelo Scola of Venice was asked what the papal position was.

“He does not want to say that which he does not say,” the cardinal responded.

The pope reminded bishops that they must call all Catholics, particularly politicians, to coherence of faith and action, “but he cannot substitute himself for the pastoral prudence of the bishop,” the cardinal said.

The complete text of the pope’s post-synodal apostolic exhortation can be found at:
www.vatican.va/holy_father/benedict_xvi/apost_exhortations/documents/hf_ben-xvi_exh_20070222_sacramentum-caritatis_en.html

The full text of “Sacramentum Caritatis” (“The Sacrament of Charity”) will be printed by USCCB Publishing, publication No. 7-002 (English) and 7-800 (Spanish). USCCB Publishing has begun taking prepublication orders. The price will be $6.95. Orders can be made at www.usccbpublishing.org by calling (800) 235-8722.