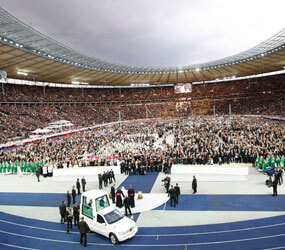 BERLIN ¬ Pope Benedict XVI celebrated Mass in Berlin’s Olympic Stadium and appealed for a better understanding of the church, one that goes beyond current controversies and the failings of its members.

The evening liturgy Sept. 22 was the religious high point of the pope’s busy first day in the German capital, where he also met with government leaders, Jewish representatives and addressed the parliament.

About 70,000 Catholics gave the 84-year-old pontiff a rousing welcome when he rode in a popemobile through the stadium, which was built by the Nazi regime to host the 1936 Olympic Games. The pope paused to kiss several babies as young people waved scarves imprinted with the theme of the papal visit, “Where there is God, there is a future.”

In recent years, the church in Germany has experienced a consistent drop in religious practice, including Mass attendance. Internal debates have simmered over such issues as priestly celibacy, and recent revelations of clerical sex abuse have drawn widespread criticism from other sectors of society.

In his homily, the pope said part of the problem was that people mistakenly see only the outward form of the church and consider it merely as another organization in a democratic society. He asked for a broader understanding of the church as a communion of life with Christ.

He said people need to realize that although the church contains some bad members, “if only these negative aspects are taken into account, then the great and deep mystery of the church is no longer seen.”

When that happens, he said, the church is no longer a source of joy.

“Dissatisfaction and discontent begin to spread, when people’s superficial and mistaken notions of ‘church,’ their ‘dream church,’ fail to materialize,” he said.

The pope said that when the church goes through troubled times, its members should take comfort and strength from their closeness to Christ. This sense of “abiding in Christ” is especially needed in “our era of restlessness and lack of commitment, when so many people lose their way … (and) when loving fidelity in marriage and friendship has become so fragile,” he said.

The pope did not discuss in detail any of the particular issues that divide German Catholics. Instead, he encouraged them to support one another and “stand firm together against the storm.”

Altar girls were prominent in the procession at the start of the papal Mass, carrying the cross and candles as the procession wound up a staircase to an altar platform high above the stadium ground level.

After making the rounds in the popemobile, the pope was greeted by Berlin’s mayor, who gave him a model of the Brandenburg Gate, an emblem of the once-divided city.

While the pope was vesting for Mass, rain began to fall on the bishops, priests and dignitaries seated on the stadium’s field. Chancellor Angela Merkel and the prelates and politicians around her scrambled to open disposable plastic raincoats.

At the beginning of the Mass, Berlin Archbishop Rainer Woelki formally welcomed the pope to the “city where only one in three people is a member of a Christian church. You are coming to a city where God has been forgotten and atheism has taken hold.”

But the city’s Christians are working to give new life to the faith and to remind people of the great sacrifices Berlin’s Christians made to defend faith and their fellow human beings during the Nazi years, he said.

“This is not a godless city. It is even a city of martyrs,” the archbishop said.

Contributing to this story was Cindy Wooden in Berlin.